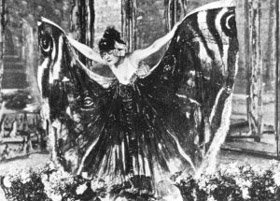 the butterfly dance served to inspire a dancer who was to become the toast of all of paris.

Around the turn-of-the-century the figure of the dancer, and particularly that of Loïe Fuller, can be found at the heart of an aesthetic revolution in Paris. Fuller appears in writings on this historical period as the figure who “embodied” the changing perception of human physicality, in particular its function regarding the production of meaning. Fuller's dancing is an exemplary model of transformation through flux and rhythmic continuity.

Following is a description of Fuller by her contemporary, Isadora Duncan, who travelled with Fuller to Berlin prior to her own successful tours to Europe: "Before our very eyes she turned to many-coloured shining orchids, to a wavering, flowing sea-flower, and at length to a spiral-like lily, all the magic of Merlin, the sorcery of light, colour, flowing form... She transformed herself into a thousand colourful images before the eyes of her audience. Unbelievable. Not to be repeated or described." 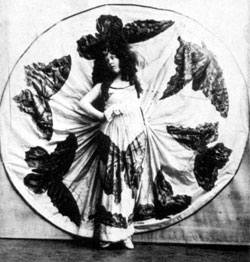 This was a dance of transformation through motion; flowing, spiralling, wavering, turning movements that fired audience's imaginations and inspired multiple readings of the morphing shapes she created. Marked by instability as a signifier and a quality of constant flux, this art was “not to be repeated or described”, a dance of continual invention that bypassed poses and postures, emulating the ephemeral “flow of life”.


Stephane Mallarme, the leading poet of the Symbolist movement, dubbed her "La Loie" and described her dancing as "the dizzyness of soul made visible by an artifice."

more photos of la loie and of sada yacco, a dancer from japan who came to study and dance with fuller. (go all the way to the end on the right, then click on the photo) posted by lotusgreen at 8:40 PM

What is it with all these dancers who were the toast of Paris at the heart of an aesthetic revolution? In addition to Fuller, there was Josephine Baker (who theoretically brought African rather than Asian culture to Paris and furthered the jazz revolution after Picasso began drawing from African art) and in an earlier century Jane Avril who of course inspired Toulouse Lautrec and his group. Those French painters sure seem to get heated up by dancers!