japonisme: solstice III: the emergence into the light

solstice III: the emergence into the light

the japanese winter solstice celebration includes the witnessing of the first sunrise of the new year. "According to Shinto legend, Amaterasu, the Sun goddess, hid herself in a rocky cave in heaven, causing darkness and chaos to cover the world.

She was eventually enticed to peek out by the laughter and dancing of the other gods. A mirror was used to reflect her light as she opened her door, enticing her out. 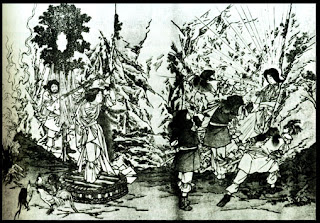 The cave was then closed off to ensure she could not return." 1

and the release of the light from the cave, the summer from winter, the birth from the womb, plays over and over.

"As she was gathering flowers with her playmates in a meadow, the earth opened and Pluto, god of the dead, appeared and carried her off to be his queen in the world below. ... Torch in hand, her sorrowing mother sought her through the wide world, and finding her not she forbade the earth to put forth its increase. So all that year not a blade of corn grew on the earth, and men would have died of hunger if Zeus had not persuaded Pluto to let Persephone go. But before he let her go Pluto made her eat the seed of a pome- granate, and thus she could not stay away from him for ever. So it was arranged that she should spend one-half of every year with her mother and the heavenly gods, and should pass the rest of the year with Pluto beneath the earth." 2 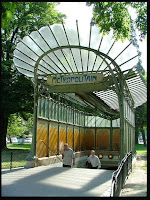 our arts mimic our bodies and ourselves, our beliefs and our visions.

something so fundamental that it shows up in out symbology on every level: the return of the sun, the birth of the son, the festival of lights.

we are here facing the solstice, the return of the light. here, even in our modern age we feel it in our bones. the is nothing so profound as the darkness growing every day, and then stopping so the light can return again. it's a rebirth.

i began to see all of the corollaries, and i see them still.

the words are different but the themes continue to repeat, over and over, in countries all over the world there are echos of each other's myths, of the cycle of birth and death. a number of years back i reached a crisis of faith, i suppose, and read quite a few books (like 80 or so) on psychology, philosophy, biology, and religions. one night i woke up in the middle of the night and said: they're all saying the same thing! live not from fear but from love. move from the darkness into the light.

posted by lotusgreen at 6:27 PM

For me,this is a shock and great Enlightenment.

oh my hp, i could not ask for more. thank you.

and happy return of the light to you.

The hippy's favourite perfume, Patchouli oil, used to be used to employed in India to preserve the corpses of the dead.
It seems as if it's been pretty good at preserving memories of hippiedom too!

Yup, There's only one myth. It's the one we learn as we make our first journey down that dark passage into the light and into our lives.
Some people see the same thing as they die - that journey into light.

Happy Solstice lotus. And many more of them!

michael--what a great connection! i had not put that together: the "going into the light" you hear about so many near-death experiences.

now about that patchouli oil matter....