i have learned that ethel larcombe was part of the glasgow art scene and worked for talwin morris at blackie's publishing. in fact, one of her designs has already been posted right in this very blog, as was kindly noted in the comments section. (added on the 24th) 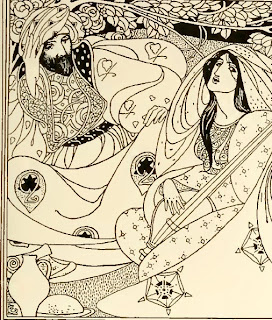 yesterday's post of the cover of the studio (below) prompted margaret to ask who had done the artwork. i wrongly guessed will bradley, and then jalf pointed out how much it looked like something pre-raphaelite. 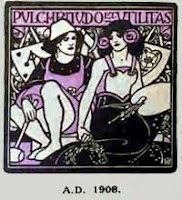 i have now spent two days online and in several dozens of my books, and i think i finally have the right answer: ethel larcomb.

i have still been unable to find an accredited version of that actual cover (which i think was on every issue of the magazine), but i have found, among others, these two images which are attributed to her. i think the facial shapes, the decorative elements, and the backgrounds make it pretty clear that the image below was hers. 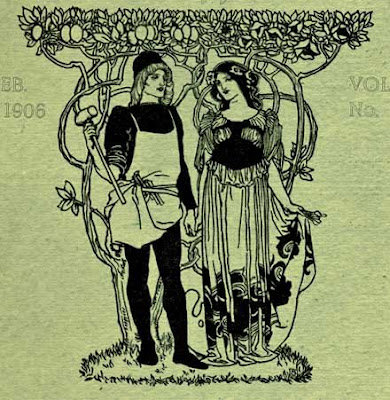 posted by lotusgreen at 8:03 PM

Thank you so much for finding out who it was! It's just lovely.

my pleasure margaret--thank you for asking. i'm finding out more about her today, she was part of the glasgow group and occasionally designed books for talwin morris, so i may be adding on to this post.

I just happen to have a copy of that issue of The Studio. There is a mark down in the grass on the left hand (woman's)side that looks to be a J that makes up one side of a square that contains a B. After all of your research, I don't know if you want to investigate any further. I could send you a scan.

thank you dorothy. someone has already sent me a scan and is a staunch supporter that that b means it's not larcombe. but to me, the nearly identicle drawings of the cover and that tiny illustration are proof enough for me.

but yes-- i'll stay on it until i have a definative answer!

It is a wonderful image, whoever did it.

Hello lotusgreen, I happened across your flickr postings posing the Larcombe question, and wondered if you had found a satisfactory answer.
The little research I have managed would suggest that the image of the male and female figures is one of a standard classical nature.
The text behind Ethel's drawing is pulchritudo et utilitas; Latin for beauty and utility. I would suggest that the figures represent at least two tenets of Art, the male figure Architecture with his hammer and nails, and the female figure Painting, with her palette and brushes. This may derive possibly from the absolute historical of Vulcan and Venus.
If this is true, then the image would be well known to many artists and would be a standard rendition of a representation of 'Art', thus Ethel and 'B' would use the same representation, and this would explain the similarity of the images.

I know that the Studio ran a competition to find a 'Logo' some of which I have in other publications, but I do not have issue 2 of the Studio itself. Maybe if we can find the winner of the competition, we can identify 'B'.
I trust you do not mind this ramble, and wish you well.
Regards, Andy aka Sans.

thank you, andy sans. i ended up finding a library book that had a lot of attributions for things from The Studio. i seem to recall that the name they attributed to that cover was Bell? sorry to be so unclear, but it was a while ago and i wasn't sure i believed it! looking at this post now, though, i must admit i can see some differences in style in the pieces in this post.... so maybe that could be him after all.

i went over to archive.org to see if they had that issue of the studio, but i don't think they do.

As long as you solved the mystery to your satisfaction. I was attributing the cover graphic to Fred H. Ball, but Bell is close enough.
It's all beautiful!

you must be right... thanks!