a few posts back, we learned that dow moved to paris to study at the academie julian under boulanger and lefebvre. what we learn today was that he was far from the only american painter to do exactly that exactly then. "The Académie Julian which was the largest and most important art school in Paris. Julian's fees were relatively modest and there were no preconditions or entrance requirements, consequently it attracted large numbers of foreigners from many nations -- Russians, Japanese, Brazilians, Britishers, and many Americans. 1 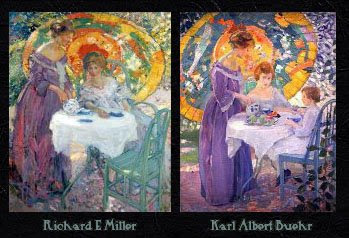 they were dubbed "the giverny luminists" or "giverny group," often exhibiting together, both in france and back in the US. they obviously painted together. sometimes at the same moment, and sometimes maybe at the same moment. the questions are endless -- are these (below) the same pool? both are surrounded by nasturtium.... are they at monet's house? looks like his house but i don't see that little circular pond anywhere.... 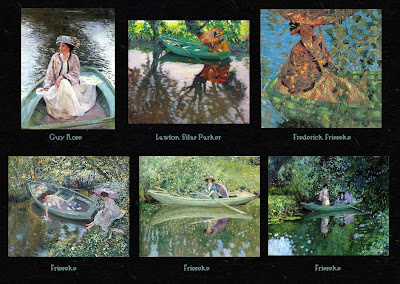 studying about all of this, i began to wonder about something. dow was at the same school, at the same time, and followed the other artists (many of whom were infatuated with japanese prints) to giverny, and as they gravitated towards something of the same style, he came home dejected, and it wasn't until several years later that he "discovered" hokusai's prints in a book at the library. Why?
(to be continued)

posted by lotusgreen at 5:46 PM

The Académie Julian was important not just for the open welcome and high standard of tuition it gave to foreign artists, but also because it was open to women, at a time when they were barred from schools such as the government-financed Écoles des Beaux-Arts.

that's very interesting neil--thank you. what would i do without you?

Impressionism , like Japonisme , was such a 'Pandora's Box' for how Western artists began to look at, and interpret their world.

There was no going back once the box was opened.

nicely put. in my mind, they're all connected.

Hello, it is not my first visit, but it is the first time I take time to read carefully your post.
I visited 3 times Giverny and I can't understand how Dow did not see all the Hiroshige and Hokusai woodblock prints. They are every where, and on old pictures of the house, they were already everywhere when Monet was alive.
Have you more informations ?
Thanks.
By the way, you blog is very interesting.

oh thank you so much to taking the time to comment, laurent. i sometimes do so much research and then it seems that people only look at the pictures!

it's a good question, and one i look at more fully in this loooong series. i do know that dow actually spent more time in the brittany area than giverny, but given that the nabis were also very involved with japanese prints, the question still holds.

i think maybe he'd just OD'd on school when he returned to ipswich, and felt something was missing.

his relationship with fenollosa became very important to him. when fenollosa introduced him to japanese art, dow was really able to see it.

he spent many long nights with fenollosa.... studying.... his wife was "very patient." i have wonderered seriously whether or not that relationship between fenollosa and dow went further than just mentor to student, but so far i have not found any leads other than that they hung out with other gay men, sometimes. but this was, not surprisingly, the avant garde, so nothing is proved by the fact.

i will continue to do the research.

I visited Giverny a few years ago, and I can't remember the circular pond Have you ever been there? We decided to restore our own pond after our visit of Giverny. It's a magical place, I even managed to forget the other tourists there.

yes! i made a pond in my backyard after that too!

i was there 20 years ago but it was autumn so there were no water lilies and there were so many busloads of people that it made me kind of crazy.