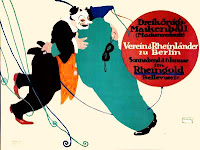 Frederick Knieps,
Physician of the Bed Chamber,
to the Empress Teresa,
resolved that his son
should be a doctor,
but the youth, having established relations with Agnes,
the tightrope artist,
married her,
and founded the circus dynasty of Knieps
with which the newspapers are so much concerned. 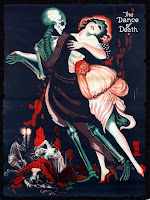 Charlotte, the daughter of Frederick, married the clown,
whence sprang Marie and Otto.
Otto married Lily Braun,
the celebrated contortionist,
who had a saint's image
tattooed on her belly.
The daughter of Lily Braun --
she of the tattooed belly --
wanted to enter a convent,

but Otto Frederick Knieps would not consent,
and Margaret continued the circus dynasty
with which the newspapers
are so much concerned.
Then Margaret had her body tattooed,
suffering greatly for the love of God,
and caused to be engraved on her rosy skin
the Fourteen Stations of Our Lord's Passion.

No tiger ever attacked her;
the lion Nero, who had already eaten two ventriloquists,
when she entered his cage nude,
cried like a newborn babe.

Her husband, the trapeze artist Ludwig, never could love her thereafter,
because the sacred engravings obliterated
both her skin and her desire.
Then the pugilist Rudolph,
who was an atheist
and a cruel man,
attacked Margaret and violated her.
After this, he was converted and died. 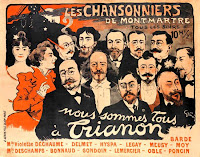 Margaret bore two daughters who are the wonder of
the Knieps's Great Circus.
But the greatest of miracles is their virginity
against which bankers and gentlemen with monocles
beat in vain;

their levitations, which the audience thinks a fraud;
their chastity, in which nobody believes;
their magic, which the simple-minded say is the devil's; 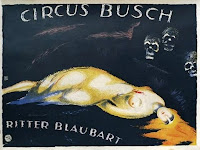 yet the children believe in them, are their faithful followers, their friends, their devoted worshipers.
Marie and Helene perform nude;
they dance on the wire and so dislocate their limbs
that their arms and legs
no longer appear their own.

(why did this poem appeal to me so strongly at this moment? serendipity. the largest labor demonstration is the country's history. nuclear meltdown. a flood of people, facing potential optimism, in madison, in lansing. a flood of mud, a flood of blue and white cars, people facing certain despair. i think i will kiss a bear and dance with a skeleton.)

posted by lotusgreen at 6:13 PM

i'm so glad you think so, zoe. thank you. i happened across this poem when i grabbed an old book off my bookshelf, randomly. bought for research a decade ago, barely read, left in the rain once, all curled up and wierd.

there has been, i learned, an entire ballet based on this poem, which itself is based on a true story. check it out here.