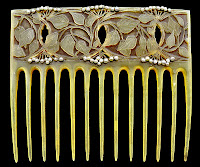 the european cult of things japanese was more than a mere exotic fad, as the results were more far-reaching than those arising from a simple love of novelty.

fashion and its accessories acquired a new importance in europe though the general enthusiasm for japanese culture. women wore long, narrow skirts with flounces, which in outline closely resembled the obi.

people tripped around the streets of paris as if they had just stepped out of the yedda ballet--which had its first performance in 1879.

the formal way of moving the hands and feet and the kinked body posture, together with the costly kimono-like clothes of the ladies of the time, exuded a mysterious, magical aura of oriental sumptuousness.

far eastern modes were like an intoxicant. the moment of cultural balance, so to speak, between japan and europe had arrived. around 1900 women appeared in theatres with voluminous head adornments, decorative combs, hair-grips, and hairpins along japanese lines. 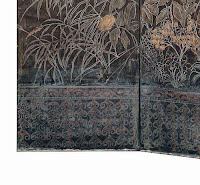 these would be set in tall coiffures, equally influenced by oriental theater, ballet and operetta. from japonisme, by siegfried wichmann

posted by lotusgreen at 2:31 PM

"the european cult of things japanese was more than a mere exotic fad..."

Yes, and hardly past tense!