japonisme: grun: the first and last of cool

grun: the first and last of cool

When the Bal Tabarin opened, it was a collaborative effort between two seasoned show-business entrepreneurs: Lajunie, the owner of the Treteau de Tabarin and Auguste Bosc, the conductor of the Moulin de la Galette orchestra. Located in Montmartre, which was already a thriving village on the outskirts of Paris, they hired Grun to design the poster. The result is one of Grun's last classic images, that is populated with many of the artist's favorite subjects: a sexy young woman in Grun's near-fetish, red dress, an older, "fun-loving" bourgeois and in the background a black dandy wearing a bowler. This is the original version of the poster. A later version exists where the black character has been replaced by a white man with a too-slick moustache.

Much of Montmartre's excitement at this time came from such activities as satires and performances that tested the limits of the cabarets and café-concerts, and bawdy displays in the dance-halls.

On the right the Catholic Church resisted repub- lican attempts to wrest educa- tion from its traditional grasp, both sides realizing that their future influence, even survival, depended on their ability to inculcate their own values, whether religious and hierarchical or scientific and egalitarian, in the next generation. 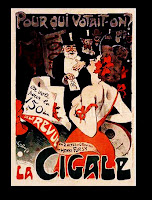 The liberalizing of censorship in 1881 was a republican reform that released the shackles of satire, sparking the cabarets, illustrated magazines, and climate of irreverence. 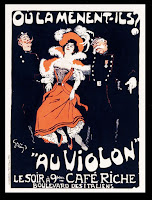 The critique of decadence -- drawing attention to society's class divisions, moral corruption, and sexual exploitation -- came from various quarters. Conservative forces might use it to condemn modernity in relation to the superior values of the past, while the left used it to promote its own radical agenda. The republic reacted defensively, with moralizing propriety allied to a degree of censorship... Songs performed in the cafés were controlled, Yvette Guilbert being obliged to drop a verse about lesbians from Maurice Donnay's song "Eros vanné."

Maurice Talmeyr accused contemporary posters of being a corrupting influence, typically modern and decadent in their feverish commercialism and lack of respect for women, religion, and authority, calling for them to promote more elevated values... it was argued that the recent proliferation of the multicolored poster was a lively counter to the regime's stuffiness.

The decadent critique was central to the "Montmartre" culture of cabarets, illustrated periodicals, and popular song... The easing of the censorship laws in 1881 gave scope for the younger generation's perception of the bourgeois republic as corrupt and venal, stuffy and hypocritical. During the early 1880s Montmartre rapidly developed into the locale where such anti-establishment attitudes were stridently voiced.

The momentum of this surge of pleasure seekers is downward -- it is, literally, decadent... The smart bonnets and top hats [in the artwork] reveal [the audience] as bourgeois; their fictive presence in a dance hall watching a working-class woman dancing provocatively suggests the decadence that the Montmartre entertainment industry so assiduously marketed. The decadent critique, taken from wider social debate and geared into commercial entertainment became what unified Montmartre in the eyes of Parisians, French, and foreigners.

By the later 1880s the dance halls of Montmartre were attracting more and more audiences from outside the quartier, and in 1889 Oller and Zidler launched the Moulin Rouge to capitalize on this by presenting a wide range of attractions. Growing activity and increasing investment led to greater media coverage and to still greater momentum within what could now be defined as the Montmartre's entertainment industry. That momentum is evinced by the rapidity with which the promotional machinery seized on a new "star" and propelled him or her into instant celebrity. Take the case of Yvette Guilbert, a nobody performing in the provincial cafés-concerts of Lyon in the summer of 1889. Yet by December 1890 she was being lauded by the influential journalist Jean Lorrain as a deluxe product: "the article de Paris most in fashion."

Success led to over-exploitation: a constant appetite for novel and not necessarily better acts... But by the mid-1890s momentum and originality were waning. The Moulin Rouge was increasingly a tourist trap; the Chat Noir closed its doors in 1897. The lively posters made at the turn of the century by artists such as Jules-Alexandre Grün were advertising a faded "Montmartre," in Grün's case explicitly, for the foreigner.

The quartier's subculture, based as it had been on a critique of contemporary society's decadence, had itself become shallow, exploitative, and decadent.

(mostly excerpted from coverage of the national gallery of art's exhibition entitled toulouse-lautrec and montmartre.)

posted by lotusgreen at 4:18 PM