Early twentieth-century Paris saw an embarrassment of half-naked women dancing with seven veils and papier-mâché heads: ‘Salomania’ had gripped the capital. By 1913 Salome was a regular feature on music hall show-bills, besides the balletic and operatic stage. 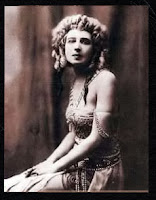 ...Three variations on Salome's notorious Dance of the Seven Veils, [were] performed by Loie Fuller (1907), Ida Rubinstein (1909) and Maud Allan (from 1906) on music by Florent Schmitt, Nikolay Rimsky-Korsakov and Richard Strauss respectively. 1 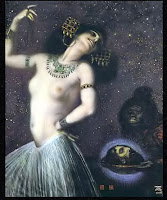 Bram Dijkstra has written of the general fin-de-siècle interest in Salomé that "Salomé's hunger for the Baptist's head thus proved to be a mere pretext for the men's need to find the source of all wrongs they thought were being done to them. Salomé, the evil woman, became their favourite scapegoat." In order for the spirit to triumph over the body, Salomé had to be executed "in a cleansing massacre." Her death became the triumph of the Victorian male over sexual temptation. 2

Christians traditions depict her as an icon of dangerous female seductiveness, for instance depicting her dance mentioned in the New Testament (in some later transformations further iconised to the dance of the seven veils), or concentrate on her lighthearted and cold foolishness which according to the gospels led to John the Baptist's death. 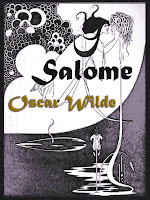 A new ramification was added by Oscar Wilde, who in his play Salome let her devolve into a necrophiliac, killed the same day as the man whose death she had requested. This last interpretation, made even more memorable by Richard Straus's opera. 3

Joseph Cornell's L 'Egypte de Mile, Cléo de Mérode, 1940, is not the Egypt seen by Flaubert, detachedly noting the gleam of his white socks at mid- night on the Nile. Cornell had never been, or wished to go, to that Egypt. But in his mind the image of Cléo de Mérode, a courtesan who so enraptured Paris society in the '90s that even Proust is said to have murmured "Gloria in excelsis Cléo!" when she walked into Maxim's, fused with those of Cleopatra and the Sphinx. 4 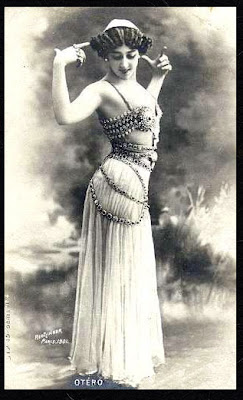 Within a short number of years, Otero grew to be the most sought after woman in all of Europe. She was serving, by this time, as a courtesan to wealthy and powerful men of the day, and she chose her lovers carefully. She associated herself with the likes of Prince Albert I of Monaco, King Edward VII of the United Kingdom, Kings of Serbia, and Kings of Spain as well as Russian Grand Dukes Peter and Nicholas, the Duke of Westminster and writer Gabriele D'Annunzio. Her love affairs made her infamous, and the envy of many other notable female personalities of the day.

Six men reportedly committed suicide after their love affairs with Otero ended, although this has never been substantiated beyond a doubt. It is a fact, however, that two men did fight a duel over her. She was pretty, confident, intelligent, with an attractive figure, and was famed for her voluptuous breasts, and one of her most famous costumes featured her breasts partially covered with glued-on precious gems, and the twin cupolas of the Hotel Carlton built in 1912 in Cannes were modeled after her breasts.

It was once said of her that her extraordinarily dark black eyes were so captivating that they were "of such intensity that it was impossible not to be detained before them." 5

The Belle Epoque, the period that Otero symbolized, was famous not only for its writers, artists, playwrights, and actors but also for the glittering social scene which was staged almost continuously on the Grands Boulevards in Paris, the epicenter of the atmosphere, and the stage on which the courtesan played a vital and charismatic role. 6 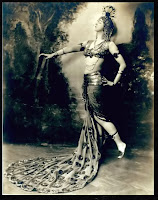 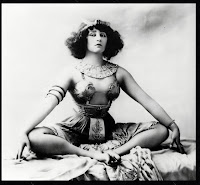 The genius of the courtesan was in how she turned the same ingredients to her advantage. Considering the distribution of power between men and women in the times during which she lived, to say that she turned the tables would be an understate- ment. If we ponder very long the fact, for instance, that La Belle Otro, the famous courtesan of the Second Empire, successfully demanded from one of her lovers the priceless long diamond necklace that had once belonged to the former queen, Marie-Antoinette, we may begin to appreciate the dimensions of the reversal. Yet exactly how this stunning victory was achieved remains a mystery. 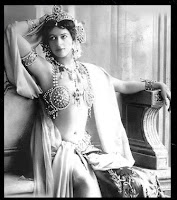 Some clues are given to us in a story that Colette tells about a conver- sation she had while she was still performing in music halls with La Belle Otro. Thinking the young woman somewhat green, Otro offered her some advice. "There comes a time," she said, "with every man when he will open up his hand to you."

"But when is that?" Colette asked.

"When you twist his wrist," Otero replied.

Like many courtesans, Otero was known for her wit. Doubtless, that is why Colette remembered the dialogue. Indeed, the key we are seeking to the mystery is less in the content of Otero's answer than in the way it was given. She delivered her last line with con- summate timing. And looking further at what she told her young protegee, it becomes quickly evident that the crucial phrase in her advice is not in the last line but in the first phrase, "There comes a time." The secret of her success was that she chose exactly the right moment to twist her lover's wrist. 7

And there is reason for the disappearance of this tradition. The temper of the times has shifted, too. Technically speaking, many women today do what courtesans did; it is quite common still for a married man to support his mistress, and a whole population of highly cultivated and elegant women serve today as escorts, call girls, and modern hetaerae. But just as surely as the role of the courtesan was created by historical conditions, she was also inextricably linked to a historical mood that had come to an end by the third decade of the last century. In 1948, after visiting La Belle Otero, Anne Manson wrote: "When Otero departs there will depart with her the last symbol of an epoch, superficial, light and at the same time virtuous and cynical, covetous toward others yet madly extravagant in its pleasures, full of faults but not without its splendors." 6

i didn't expect to go here, but here came to me, with six of these women having been known as being courtesans in addition to being in the theater. another writes about courtesans, but, as phyllis rose says, "Colette's courtesans don't die of tuber- culosis. They guard their jewels and railway shares and, with good humor and a firm hand on the servants, gracefully grow old." (8) others are dancers, actors, authors, yet inseparable from that moment's demi- monde. one more installment in paris tomorrow, and then we visit another time and place where there was a very very similar demi-monde.

posted by lotusgreen at 7:38 PM

One of my favorite interpretations of the Salome tale was Gustav Klimt's take on it. Wonderful painting.

i've got a surprise coming for you dominic

This name hasn't been popular in sometime. I wonder if it will return. h'mmmm

Very interisting post but I think all your blog is interesting and beautiful ;-)

Hello! i am hoping you might be able to give me the source info/citation for the salome painting above (the barebreasted dancing one with the horribly racist figure holding John's head on the charger. I'm a student doing research on Salome postcards, and this painting is clearly modeled after one.