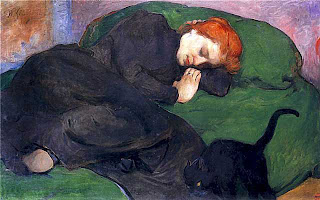 Most singular was the destiny which united to me this cat of the yellow race, progeny of obscure parentage and destitute of all beauty.

It was at the close of our last foreign war, one of those evenings of revelry which often occurred at that time. I know not how the little distraught creature, driven from some wrecked junk or sampan, came on board our warship, in great terror, seeking a refuge in my cabin beneath my berth. She was young, not half grown, thin and melancholy, having doubtless, like her relatives and masters, subsisted meanly on fishes' heads with a bit of cooked rice. I pitied her much and bade my servant give her food and drink. 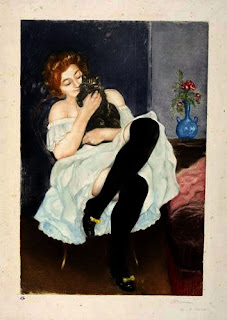 With an unmistakable air of humility and gratitude she accepted my kindness, — and I can see her now, creeping slowly toward the unhoped- for repast, advancing first one foot, then another, her clear eyes fixed on mine to assure herself that she was not deceived, that it was really intended for her.

In the morning I wished to turn her away. After giving her a farewell breakfast, I clapped my hands loudly, and stamping both feet together by way of emphasis, I said in a harsh tone, " Get out, go away, little Kitty ! "

But no, she did not go, the little pagan. Evidently she felt no fear of me, intuitively certain that all this angry noise was a pretense. With an air that seemed to say, "I know very well that you will not harm me," she crouched silently in the corner, lying close to the floor in a supplicating attitude, fixing upon me two dilated eyes, alight with a human look that I have never seen except in hers. 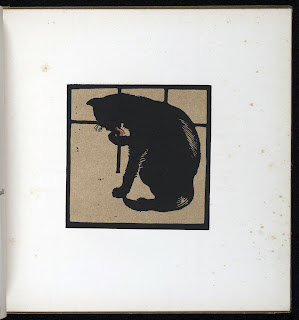 What could I do ? Impossible to domicile a cat in the contracted cabin of a warship. Besides, she was such a distressingly homely little creature, what an encumbrance by and by !

Then I lifted her carefully to my neck, saying to her, " I am very sorry, Kitty " but I carried her resolutely the length of the deck, to the further end of the battery, to the sailors' quarters, who usually are both fond of and kind to cats of whatever age or pedigree.

Flattened close to the deck, her head imploringly turned towards me, she gave me one beseeching look ; then rose and fled with a queer and swift gait in the direction of my cabin, where she arrived first in the race between us ; when I entered I found her crouched obstinately in the corner from which I had taken her, with an expression, a remonstrance in her golden eyes, that deprived me of all courage to again take her away. And this is the way by which Pussy Chinese chose me for her owner and protector. 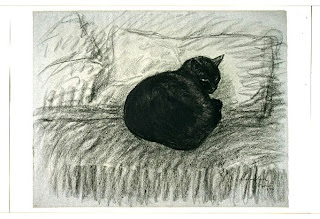 My servant, evidently on her side from the debut of the contest, completed immediate preparations for her installment in my cabin, by placing beneath my bed a lined basket for her bed, and one of my large Chinese bowls, very practically filled with sand; an arrangement which froze me with fright.

DAY and night she lived for seven months in the dim light and unceasing movement of my cabin, and gradually an intimacy was established between us, simultaneously with a faculty of mutual comprehension very rare between man and animal. 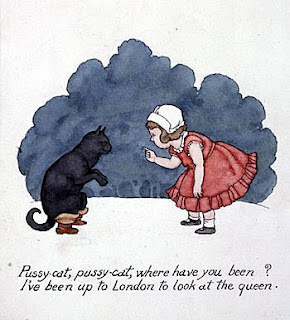 I recall the first day when our relations became truly affectionate. We were far out in the Yellow Sea, in gloomy September weather. The first autumnal fogs had gathered over the suddenly cooled and restless waters. In these latitudes cold and cloud come suddenly, bringing to us European voyagers a sadness whose intensity is proportioned to our distance from home. We were steaming eastward against a long swell which had arisen, and rocked in dismal monotony to the plaintive groans and creakings of the ship. It had become necessary to close my port, and the cabin received its sole light through the thick bull's-eye, past which the crests of the waves swept in green translucency, making intermittent obscurity. I had seated myself to write at the little sliding table, the same in all our cabins on board, — during one of those rare moments, when our service allows a complete freedom and peace, and when the longing comes to be alone as in a cloister. 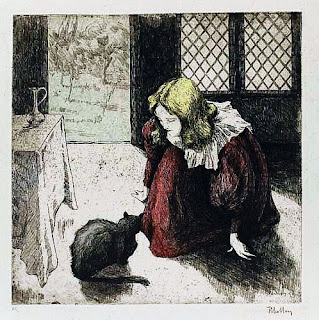 Pussy Gray had lived under my berth for nearly two weeks. She had behaved with great circum- spection; melan- choly, showing herself seldom, keeping in darkest corners as if suffering from homesickness and pining for the land to which there was no return.

Suddenly she came forth from the shadows, stretched herself leisurely, as if giving time for farther reflection, then moved towards me, still hesitating with abrupt stops; at times affecting a peculiarly Chinese gesture, she raised a fore paw, holding it in the air some seconds before deciding to make another advancing step ; and all this time her eyes were fixed on mine with, infinite solicitude.

What did she want of me ? She was evidently not hungry : suitable food was given her by my servant twice daily. What then could it be?

When she was sufficiently near to touch my leg, she sat down, curled her tail about her, and uttered a very low mew; and still looked directly in my eyes, as if they could communicate with hers, which showed a world of intelligent conception in her little brain. She must first have learned, like other superior animals, that I was not a thing, but a thinking being, capable of pity and influenced by the mute appeal of a look; besides, she felt that my eyes were for her eyes, that they were mirrors, where her little soul sought anxiously to seize a reflection of mine. Truly they are startlingly near us, when we reflect upon it, animals capable of such inferences. 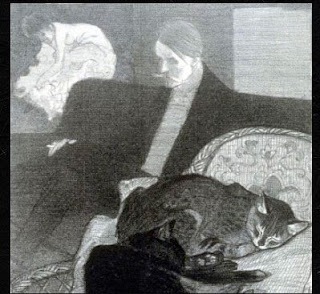 As to myself, I studied for the first time the little visitor who for two weeks had shared my lodging: she was fawn- colored like a wild rabbit, mottled with darker spots like a tiger, her nose and neck were white; homely in effect, mainly consequent on her extremely thin and sickly condition, and really more odd looking than homely to a man freed like myself from all conventional ideas of beauty. Besides, she was quite unlike our French cats : low on the legs, very long bodied, a tail of unusual length, large upright ears, and a triangular face; all her charm was in the eyes, raised at the outer corners like all eyes of the extreme Orient, of a fine golden yellow instead of green, and ever changing, astonishingly expressive. 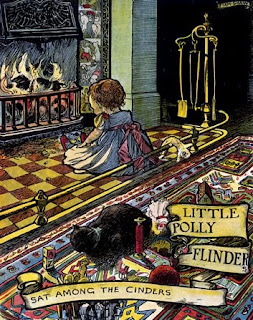 While examining her, I laid my hand gently upon her queer little head, stroking the brown fur in a first caress.

Whatever she experienced was an emotion beyond mere physical pleasure ; she felt the sentiment of a protection, a pity for her condition of an abandoned foundling. This, then, was why she came out of her retreat, poor Pussy Gray; this was why she resolved, after so much hesitation, to beg from me not food or drink, but, for the solace of her lonely cat soul, a little friendly company and interest.

Where had she learned to know that, this miserable outcast, never stroked by a kind hand, never loved by any one, — if not perhaps in the paternal junk, by some poor Chinese child without playthings, and without caresses, thrown by chance like a useless weed in the immense yellow swarm, miserable and hungry as herself, and whose incomplete soul in departing, left behind no more trace than her own ? 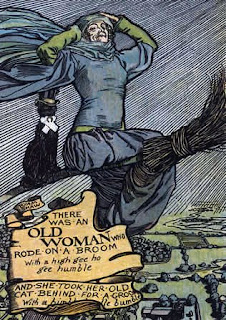 Then a frail paw was laid timidly upon me— oh ! with so much delicacy, so much discretion ! — and after looking at me a long time beseechingly, she decided to venture upon my knee. Jumping there lightly she curled herself in a light, small mass, making herself small as possible and almost without weight, never taking her eyes from me. She lay a long time thus, much in my way, but I had not the heart to dislodge her, which I should doubtless have done had she been a gay pretty kitten in the bloom of kittenhood. As if in fear at my least movement, she watched me incessantly, not fearing that I should harm her — she was too intelligent to think me capable of that — but with an air that seemed to ask: "Is it true that I do not weary you, that I do not trouble you ? " and then, her eyes growing still more tender and expressive, saying to mine very plainly: " On this position cats immediately comprehend, and say to themselves, " Here is a man who understands us; his caresses we can gratefully condescend to receive."

(he's also the guy who went to japan and was inspired to write a book called madam chrysanthemum, which was the seed to everything madam butterfly that was to follow.)

translated by mary b richards

posted by lotusgreen at 4:45 PM

beautiful, so soft and intimate. but there is also Baudelaire's daimon-cat :-)

Lotus,
What a delightful post. It makes me yearn to have a cat companion again. Do you live with one? Somehow, a room is also more companionable with a purring friend.

Hope all is well with you and that the weather warms up a little.

i am very sorry not to visit your blog recently, as my best friend died suddenly, my mood still under adjustment,but i think i am ok now.

I see the kitties were speaking to us this weekend.

The last one reminds me of Hayao Miyazaki's (studio Ghibli) Kiki's Delivery Service. That wonderful cat, JiJi, who would sit at the back of Kiki's broom. Studio Ghibli's (directed by Hiroyuki Morita) The Cat Returns is wonderful, too.

roxie--i love your comments, which often send me off on a new direction!

princess--i could not live without a cat. in my adulthood i have had three. monogamously. when robert died a year and a half ago i couldn't stand it so worked to meet ruby as quickly as possible. another beautiful day....

harlequinpan--oh--i am so sorry to hear this. i don't know what it's like in your culture, but in the united states there is a pressure to "feel better" quickly. in europe, i hear, there is not a hurry, but a respect for the healing process.

liza--you too! i have to go look these up. thank you. i should find that story about the man who leaves his woman for his cat. japanese. do you know that one?

Thank you for these images

Would you post a photo a Ruby? BTW I tagged you for an artistic little meme, and curious what you might come up with.

thank you paul--your work is beautiful, and i can see we share some historical tastes

Thank you very much!! Lily

I've always had a cat lurking around the studio. You rarely see him, but always know he's there.

i this it's quite necessary

Great blog!! I added you to my link list.

thanks matt--your new blog looks like it will be great

i love this picture of the cat with the man in the train (?). i noticed the file name has steinlen in it. could it be by theopile steinlen? i've never seen a work by him like this.. often he has girls with cats i think and it's usually very saccharine (children pouring milk for the cat, etc)

yes, that's steinlen's--some of his stuff might surprise you. he did a lot of political protest posters, and all manner of cats. (as did kuniyoshi)

he sounds like he has an obsession with cats :D did you find these works in a specific book? or they are probably scattered everywhere

obsession? with cats? i honestly don't thing such a thing is possible!