we have seen what landscape painting looked like in japan and the netherlands before 1600, when the two met, so now we shall look at the 17th century's products, and question who influenced whom.

a booklet i have from the national gallery of art reads, "The Dutch school of painting, arising in the early seventeenth century and already in decline by its end, is one of the most remarkable phenomena in the history of art.

"Unusual, first of all, is the abrupt- ness with which it appears; suddenly, about 1620, there is a Dutch school, fully-developed, a school which has its origins in sixteenth-century Netherlandsish painting to be sure, but which is quite unexpectedly original.

"Unusual, too, is the extraordinary number of great artists who worked in such a small country during so short a period of time. Finally, the solid excellence of their painting is remarkable and what might be called the homogeneity of their view of life and their interpretation of it, the consistent way in which they express their land and its people.

"They are, in fact, so Dutch! They stand apart from the artists of the other schools of seventeenth-century painting in Europe, even that of the Spanish Netherlands, just to the south. Dutch painting of the great age reveals the period and place of its origin in every passage of paint as legibly as they may be read in the label on the picture frame." 1 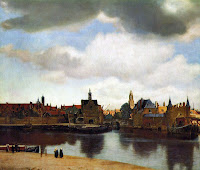 now we also read, "Folding screens called the Namban-byobu were produced in great number by artists of the Kano School from the end of the sixteenth through the seventeenth century. These screens were Japanese in style and technique.

"On the other hand, Church taught Western art techniques for the production of icons and other works of religious art which were necessary for the propagation of Christianity.

"But the Western-style of expression seen in the Edo period, the adoption of a realistic style of expression employing methods of perspective and shading, is in a different category from Namban-byobu and those religious works." 2 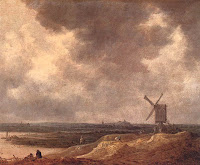 we read, "some suggest that "In the late 1620s van Goyen shifted to simpler motifs -- a few cottages along a village road or in the dunes, like in this painting -- and he achieved unification and depth by a leading diagonal and by a tonal treatment that subdues the local color and is expressive of atmospheric life." 3

this sounds to my ears like the very description of japanese art.

we may get more clues as we progress further into the edo period, and the beginnings of ukiyo-e. the dutch created everything we've defined as japanese? let's see what you think.

i want you to understand that i really do not like any of this at all. it throws so much of what i think i know into question. hokusai, hiroshige, so not japanese-y? stay tuned.

posted by lotusgreen at 1:12 PM

Which came first, the chicken or the egg? It's incredibly interesting to ponder these questions of two-way influence. With these last posts, you seem to me to be treading new water in art history.

bless you neil! i am so grateful to learn someone else is finding something interesting in all this!

please let me know any conclusions you come to when the series is done.

This process of cross germination is quite interesting.

thanks so much, princess. i hope i'm making some sense of all this.

Your theory is interesting but I do not think it is valid. The sudden rise and downfall of Dutch painting coincides with the economic and political power of the Netherlands. Holland was a wealthy nation at that time not ruled by nobility but by the wealthy merchant class. The Dutch landscape painters initially influenced by italian landscape painters, whom they met on their travels through Europe. They even painted landscapes with mountains although there are no mountains in Holland. But there was a great demand for painting by the rich middleclass.
It is true that the Dutch as a seafaring nation had relations with Japan since 1600. Around 1614 they were the only western nation allowed by the Shogun to have a permanent trading post in Japan near Nagasaki. However the rules were very strict and they were almost prisoners in their tradingpost. It is unlikely that japanese art found her way to Holland through the trading post, at least in the 17th century. In the literature I read on the Dutch tradingpost in Japan it is not mentioned.In the 18th and certainly the19th century it is more likely because then more educated people manned the trading post, although there remained restrictions on exporting goods (e.g maps)

i don't know how much of that series you read, but i do address in some places the trading of clothing which then appeared in vermeer, for example.

but i swear, sometime in the last week i found a "missing link" where gifts or trade of artwork *was* described! now of course finding the page again will be nearly impossible... but i shall try!

Hi lotusgreen, I admire your stubborness in looking for new views on this subject. As a Dutchman who lived in Japan for some years and of course visited Hirado and Deshima in Kyushu, and with a special interest in art, I was surprised by your thesis. I still think you are on the wrong track but it is worthwile and interesting enough to explore it. The kimono on Vermeer’s painting “the astromoner” seems to play an important role. There is another painting of Vermeer showing a kind of a kimono “the geographer”. There are a lot more Dutch paintings showing a kind of a kimono. Even Rembrandt did it. It is true Dutch painters at that time (17th century) were fond of foreign objects. They even collected them as Rembrandt did and used them for their paintings. But I do not think it is a kimono but it looks more like clothes from the middle east, which were often used in Dutch (biblical )paintings at that time. Examples of other paintings you will find on http://www.essentialvermeer.com/vermeer_painting_part_three.html - 1667. On this site you will also find a good explanation for the the great number of painters and paintings related to the socio-political situation in Holland during the 17th century. By the way , may be it is easier to establish a relationship with chinese drawings and paintings, because there was a much more open relationship with China at that time. And of course the Japanese were in many ways (religion, art, language) influenced by the Chinese

well, bert, you obviously have some wonderful, enviable experience!

however, i didn't come up with these bits of information out of my own head. i wonder if you read this post:

i try to footnote everything i reprint; this whole series has a lot of footnotes!

Lotusgreen, I apologize for being so direct and critical. It is a bad Dutch cultural trait! I did some homework and learned a lot. You were right on the kimono. From the second half of the 17th, but dominant in the 18th and 19th century , the “japonse rok” ( a kind of dutch kimono or chamber jacket became very popular in Holland. And its origin comes from the Japanese kimono brought in by the the VOC from Japan. Of course it was adapted by the dutch and one source also mentions turkish influences. It was mostly worn by the better classes. People were even wearing it outside to show off their standing and learning. A german scholar visiting Holland at that time was astonished by the great number of people wearing it in the streets, he called it a disease. It was even late in the 19th century a very popular dress for Dutch students. I still did not find sources, which mention the Dutch import of Japanese pieces of art (screens, drawings, prints of landscapes) in the 17th century, which could suport your point, I did find sources mentioning the collecting of woodblockprints by a Swede and the Dutch. But that was in the 18th and 19th century. Later on the VOC sent doctors/scientists to Japan and they collected a lot of drawings, even ask Japanese to make drawings. of plants, animals etc. They were primarily scientifically oriented. A famous collector was Franz von Siebold. His collection is now in a museum in Leyden Holland. He was expelled by the Japanese in 1829 , because he was in the possession of maps of Japan and was considered to be a spy.
I think it is important to keep in mind the periods you are referring at. We are talking about the first half of the 17th century, when Dutch landscape painting became important. From the 18th century on there is much more exchange of (cultural) goods, but at that time landscapepainting in Holland was already in decline. The kimono of vermeer and other dutch painters do in itself prove nothing about the Japanese influence on Dutch landscapepainting. It does prove that the only significant Dutch contribution to the world of fashion in Europe (japonse rok) was influenced by the Japanese kimono, brought in by the Dutch from Japan in the 17th century.