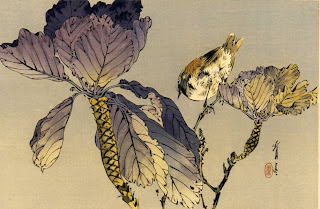 Colour-printing in Japan has lost its individuality. It is no longer the peculiar art of the lower orders, and tends more and more to sink to the level of a mere process of reproduction. 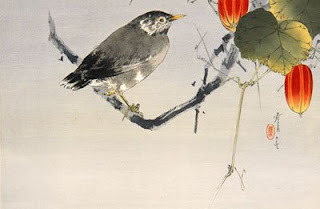 To this use it has been put in some notable modern instances the painter, Watanabe Seitei, for example, has had a number of sketches beautifully reproduced by its means but they have nothing in common with the old nishikiye [woodblock prints] and might as well have been drawn for chromo-lithography, or the three-colour process.

Perhaps this is the most fitting place for the author to venture on a brief appeal to Japanese artists to avoid imitations of European work. Of late years some among them have seen fit, naturally enough, perhaps, to try their hands at the Western methods of painting; and Japanese Impressionists, Japanese of the Barbizon school, Japanese of the Art Nouveau, and of the wilder sects of Southern Germany, have come again to their own land with pride and misunderstanding, bearing with them sheaves of pictures curiously wrought in the fashions of the masters of their choice. 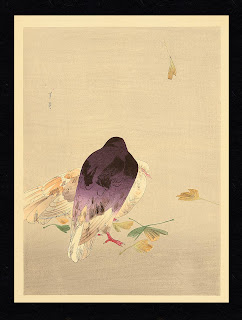 Others have tried to blend the Eastern and Western arts, so radically and immovably opposite. Always the result is failure. It could not be otherwise. Their art has a noble history and a place supreme in the love and literature of their country. In the name of all that is beautiful let them keep it there, and not adulterate and defile it with the scraps and off-scourings of the alien.
Edward F. Strange 1906 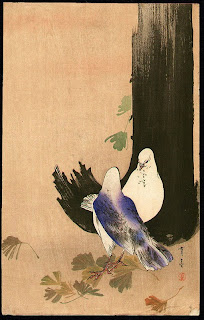 We see in Watanabe Seitei that art has been vulgarised. The coloured print has become chiefly a child's toy. Artists can no longer afford to superintend the technical processes of its production, and cheap flaring, violent pigments imported from abroad have taken the place of the delicate, rich, and costly colours of old Japan. 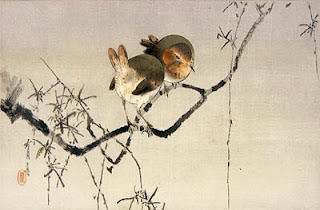 The modern Japan found a satisfactory expression of art in Seitei Watanabe. The imagi- nation of Japan has been growing wider and wider under the influence of Western art. You will find here and there in Watanabe the sure trace of a certain classic school; a graceful solitariness, like that of Tosa; a far away imaginativeness, like that of Kano; the memory, as it were, of an old lover, which will not be put aside. 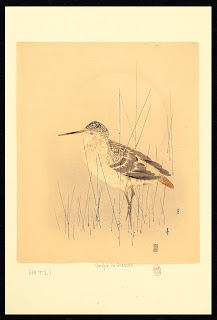 Again, in Wata- nabe, the old conven- tion- alism turns delight- fully into a hint of dignity, and unin- telli- gible symbolism into deep poetry. This artist would keep the essence of each school for his own use. Basho Matsuo, the great Japanese poet, once compared the poets and artists to a beggar's bag, because they gather whatever beauty and truth they may, from anything. Seitei Watanabe used to laugh at the artists of particular schools. He declared that he did not belong to any one.

Art critics, even critics of the past- suddenly my coffee doesn't taste right, & I don't think it's the milk that's gone sour. There's a wonderful line from Harry Nielsen's "The Point" that pretty much says you see what you want to see. If you have an expectation of what, say...Japanese art SHOULD look like (it should all look like Hokusai), & instead you get Watanabe's work with it's western influence- does that make the work "vulgarized"? Mostly I think you find yourself disapponted because an expectation hasn't been met. Personally, I find the work beautiful & graceful, but maybe because so much of the art being produced today is fairly vulgar- draughtmanship & craft a thing of the past (with exceptions, of course). I think all the cross-cultural influences are fascinating. I can see how Watanabe's work may have influenced some of the wildlife artists working today (I'm thinking Thomas Quinn, especially, right now))...hopefully he'll influence mine. I could do worse.

well, i hope your patience lasted through to the yone noguchi comment. his words sound so much like yours.

yeah, this edward f strange is a strange cat indeed. more on him to come....

Dear Lotus,
I came by to immerse my spirit in the visual beauty of your blog with renewed appreciation for this extraordinary capacity we all have. Thanks for your email and concern. I am getting settled in my new digs and look forward to a calmer 2009. I believe that in 2012 we will have to worry about solar flares. But not tonight; tonight there is just the beauty of a visit to Japonisme and the music of Schumann.

These are just gorgeous, Lotusgreen.

thank you, dear, and happy new year! i didn't realize you had moved. i hope your mums made the move well!

thank you so much, margaret -- and happy new year to you as well. i am having fun thumbing our noses at edward f strange. more nose-thumbing to come....