well, i should have turned left, going south towards france's west coast, instead of right, which sent me towards the north. brittany, home to gauguin and the nabis, rather than giverny, home of monet and the impressionists.

additional american (and other) artist colonies sprang up on the breton coasts, just as they had in giverny, and though there are conflicting reports as to whether dow and gauguin (who moved further away when so many americans arrived) worked together or never met, dow spent several summers in pont-aven.

while it was easy to see the jap- anese influence on the impres- sionists developing further north, from dressing their models in kimonos with parasols to the frequent diagonal structure, it was the artists in brittany that felt the japanese inspiration on another level.

painters from around the world spent time in the pont-aven region. when dow was there, he hung out with benjamin harrison, arthur hoeber, and charles 'shorty' lazar. the paintings of the breton group of painters "showed an overall simplification, a highly expressive use of colour, and an intensely spiritual subject matter."

the americans, and the other painters in the region, including the nabis, found inspiration for these leanings in the japanese prints then flooding france. dow himself took further inspiration from the nabis, whose style and philosophy involved the stripping away of irrelevent details, the flattening of space, and an indulgence in color. 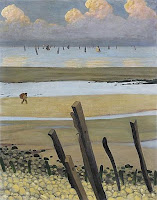 the spiritual underpinning of all this involved the seeing of the direct thing, its essential nature, the idea of it. and of course once we get into ideas, of anything, we must include the artist himself, for we are now discussing personal perception.

i could begin to list all of the americans who returned to the US from brittany, having imbibed much of the same set of values just as i could list all of the europeans they encountered there, but i'd rather deal with them in an ongoing way when i get past this lengthy chapter.

instead, i want to look at the differences at the hearts of these two communities, the differences between gauguin and monet. in both cases we are talking about light, and about the approach to abstraction, modernism: monet shattered the light while gauguin worked toward sweeping away everything but light and color. 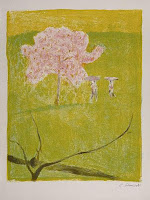 monet's philosophy was this: I want the unobtainable. Other artists paint a bridge, a house, a boat, and that's the end. They are finished. I want to paint the air which surrounds the bridge, the house, the boat, the beauty of the air in which these objects are located, and that is nothing short of impossible.

gauguin, instead, looked for something more internal; to him, going to brittany represented a return to nature in its purer form, closer to the earth itself, than existed in the rest of france. he wanted truth.

robert hughs, of time magazine, has written of gauguin, If there is an absolute originality in Gau- guin, it lies in his color, for which no amount of reproduction prepares you. It is saturated, infinitely subtle, full of the stateliest assonances and most risky contrasts; its range of emotional suggestion is immense. 1

and, Unlike the Impressionists, Gauguin did not paint what he saw: he chose to see what he wanted to paint. And his ideas on what was paintable grew out of other art—from the broad color patches and rhythmic line of Japanese cloisonne and wood block prints, from rural Breton sculpture and the flattened, monumen- tal figures of a French artist he greatly admired, Puvis de Chavannes. Style absorbed him — the pervasive feedback of art style into nature. Even the fierce colors which scandalized some of his contemporaries were meant to be remote from nature." 2 and still, a man of deep spirituality.
two artists, two schools of artists, both on a search for truth (what else is there?), one by exploding illusion, the other by scraping it away. two paths leading to the same point. i find it unsurprising, given what we've learned about dow, the man, which route he chose.

posted by lotusgreen at 6:35 AM

I loved the video; what a find. It works perfectly with your blog and the music adds another dimension altogether. How wonderful that you have been happy lately or for a while (even a butterfly moment.) Life and happiness is an elusive art form. Take care, Lotus.
Your friend,
/ph

oh i'm so glad you thought so princess--yes--it was a unexpected treasure find, i agree! and the music! (all it needed was an accordion) ;^)

agree about the art form, princess -- recently some demons have been acting up. but i guess they do that every now and again.

i tried to leave you a comment again yesterday and it didn't work again. i wanted to say how amazing it was that one never tires of that drive across the bridge.

p.s. i'll imagine, or perhaps it doesn't need my belief, that that music is breton as well. gauguin said he wanted his art to be exactly like the sound of the wooden clogs the locals wore hitting the cobblestone streets. he can't (who can?) have also turned a deaf ear to the music.

Thanks for posting this. Especially the video which has mesmerised me for the last 15mins (on loop)

thank you roland! you put a big smile on my face.

Two things stand out- How Western artists appropriated Japanese motifs & that the motifs, maybe slightly altered, translated so well. And- How art reads as language. The marks are very stylized, the color, too & yet there's no question about what you are seeing, or what's being communicated. Now, how to incorporate THIS lesson into my stuff...:)

but seriously, yes--for me, i "get it" through my eyes, my mind comes second.