What has happened before the opening of the curtain:

Shinzaemon agreed to their wedding and the newly-weds decided to run together after Gôsuke, disguised as a couple of beggars. They were helped by Fudesuke, the brother of Hatsuhana. Katsugorô fell ill on the road and unfortunately lost the use of his legs.

At the Amidaji temple in the mountains of Hakone:

Katsugorô is crippled and Hatsuhana pulls him along in a wooden cart. They walk a long way to Hakone, where lives their enemy, who has changed his name to Takiguchi Kôzuke and has joined the Hôjô clan.

They confront their mortal enemy in the Temple of Amidaji, where beggars can receive alms from the Hôjô clan members. He captures Hatsuhana's mother Sawarabi and takes pleasure in humiliating Katsugorô. Katsugorô, who has suffered many years in search of Gôsuke, limps out of his cart, seizing the hilt of his katana and looking fiercely at his enemy. The opportunity of revenge has come but the crippled Katsugorô is powerless against the villain, whose power is at his peak. Gôsuke cooly smokes his pipe at his ease and leisure. Then, he offers a deal to Katsugorô: he will spare his life if Katsugorô gives him his wife Hatsuhana. Gôsuke leaves with Hatsuhana.

At the Shirataki waterfall in the mountains of Hakone:

Hatsuhana returns and goes to the sacred waterfall of Tô-no-Zawa, where she prays within the extremely cold water for the recovery of her husband. By some miracle, Hatsuhana's prayers are answered and Katsugorô suddenly recovers the use of his legs, while Hatsuhana mysteriously vanishes!

Fudesuke arrives at the scene of the miracle, bringing with him the head of Hatsuhana, who has resisted Gôsuke's will and was beheaded by the villain. Everybody understands that the woman who prayed in the waterfall was none other than the ghost of the faithful Hatsuhana. 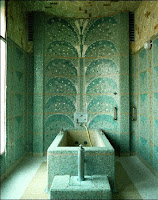 What will happen after the closing of the curtain:

Hello,
I follow your extremely interesting blog with Google Reader. Thanks a lot for these information, the beautiful pictures and their explanations.
I was wondering about an eventual relation with "La source" of Ingres which is very similar.

oh that's the perfect addition to this post, christian -- thank you so much. now that you've mentioned it, i vaguely recall that there's another one quite like the ingres.... (off to look it up....) oh well, i can't trace it right now, but when i do, i'll post it.

thanks for the kind words

A fine Bath Series ! Thanks for the great work and hours of valuable reading ! — nick

i'm very grateful to you for saying that, nick.

You know that I enjoy all your posts - but this is one of my all time favorites.

Dick Powell, Ruby Keeler and a ton of mermaids from 1933. One of my favourite movies of all time. Thanks for the great YouTube link, what a star! Definitely a great movie for a cold and wet Saturday afternoon!