three additional dutch artists included wonderful calendars in their bodies of work, and in research- ing van hoytema i've come across them frequently. 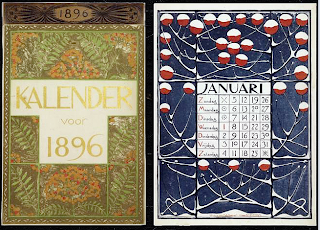 The striking impressionist group portrait by Isaac Israels is not only a demon- stration of his dexterity as an artist, but also illustrates the friend- ship that existed between, and is characteristic of, the artists of the Eighties Movement in Amsterdam. 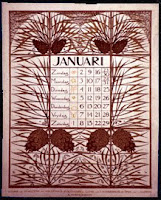 This movement determined the artistic climate in the last decades of the 19th Century. In the present lot, three (decorative) artists are portrayed who worked in the area of the applied arts and were important representatives of the 'Nieuwe Kunst' group, which developed in the Netherlands under the influence of the Arts and Crafts Movement in England. Depicted are, from left to right, Carel Adolph Lion Cachet (1864-1945), Gerrit Willem Dijsselhof (1866-1924) and Theodoor Willem Nieuwenhuis (1866-1951).

These three men would become emblematic of the applied arts department of the firm Van Wisselingh & Co., which founded a furniture and crafts workshop in Amsterdam in 1898. Israels' portrait of his three friends and contemporaries was painted in 1894 when they were around thirty years old and thus predates their commercial success with Van Wisselingh & Co. 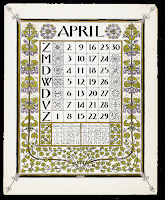 Lion Cachet sometimes worked in Israels' studio, and in the year the present lot was painted, he and Israels painted en plein air on the island Marken in order to portray its inhabitants dressed in their local costumes. 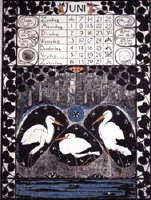 Dijsselhof lived on the ground floor of the house at the beginning of the 1890's, when he had just achieved his first successes with his paintings of aquarium fish. Just before Witsen married Marie Schorr in 1907, the front room on the first floor was adorned with wallpaper which was decorated with dragonflies and flowers designed by Theo Nieuwenhuis which can still be admired in the 'Witsenkamer' today. 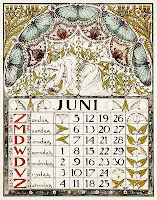 Isaac Israels was, next to Witsen, a key-figure as friend and host in this lively house on the 1e Oosterparkstraat which was so popular amongst artists. (see: Jessica Voeten, Het Witsenhuis, Amsterdam 2003, passim).
It is very likely that Israels painted the portrait of his three friends in his studio by the Oosterpark, which they regularly visited. Some careful planning can be detected in the composition: behind Lion Cachet and Dijsselhof we can see a section of the 'Delftsche Slaolie' lithograph which was designed by Nieuwenhuis in 1893.
The compo- sition of the group portrait, a cropped close-up, can be related to the then developing and popular art of photo- graphy. Breitner, Witsen and Israels were active photographers, and both Witsen and Israels used photographs as study material for their paintings. 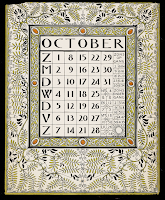 A photograph by Witsen or Israels that could have formed the basis of the present lot has not yet been found. This being the case, we may assume that Israels painted this spirited work from life. Nieuwenhuis' role in the creation of the present lot is not confined to his poster for 'Delftsche Slaolie' in the background and his portrayal in the picture. 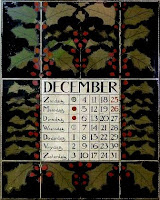 He also made a carved frame for the panel with decorations burnt into it and monograms above the portraits of the three sitters. Unfortunately, the location of the original frame is presently un- known, but the knowledge that it was made for this painting adds to the value of the work as an extraordinary docu- ment of four 'Tachtigers' which so clearly reflects the creative spirit of the era.
We are grateful to Drs Wiepke Loos for writing the catalogue entry. 1

posted by lotusgreen at 9:31 PM

HELLO, ENJOYED THE INFO VERY MUCH ...
I HAVE A 1925 [ROOSTER/PHOENIX ]VASE THAT CAREL LION CACHET DESIGNED, AND RECEIVED INFORMATION FROM MR. VISSER .I AM PLEASED TO HAVE IT

how lucky for you!