just over a year ago i happened across a website for an artist who was new to me: arie zonneveld.

but i found the site incredibly frustrating because all you got were thumbnails, and most of those without the color.

then clive received a wonderful gift from gerrie in the netherlands -- larger zonneveld images! then i realized even more had been put on youtube! (also from gerrie?)

but the thing that struck me was so improbable i still don't understand it. why does this artist's work look like he came from california?!!

i had never even really considered the fact that there was a "california look," but somehow zonneveld's work reminded me of the work of three california artist of that same time: william rice, frances gearhart, and pedro de lemos.
this strikes me as so uncanny; even when painting in oils, there is a similarity. the choices of scene and the layout, the choices of manners of portraying trees, skies, shadows. 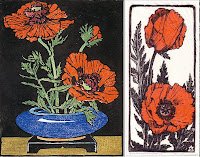 look at all of these flowers!

can you even pick out whose is whose?

even the choices of what flowers to paint; both places no doubt have poppies... but cactus flowers??!

gearhart and de lemos both studied with arthur wesley dow, and rice studied with howard pyle; i wouldn't be surprised if zonneveld had never heard of any of them.

are the landscapes similar, or the trees? was the look by then so ubiquitous that regional differences had evaporated?

no!
and thus we are left with another mystery. but what would life be without regular mystery?

posted by lotusgreen at 8:12 PM

Wow! As always, you find some of the most elegant artwork...California Arts & crafts movement at it's most European (it's not, but it's what it reminds me off). Yet more style & class to try & achieve in my own stuff withput outright copying

Hello Lotus green, thank for dedicating a post to Arie Zonneveld.
And commenting to my "gift to Clive". I did some research on how this man in his short life was able to be so creative. The Youtube and Internet pictures are not mine. I have collected some 30 prints. He made about 60. I think in the last ones he is at his height and very best but I donot know for sure because there exists no chronological record of his works. Indeed remarkable resemblances with contempary artist. Imagine: no TV, no Internet.
I highly recommend the two book by Pedro de Lemos to everybody interested in woodblockprints, aesthetics, colortheory and harmony. I dare to state that these forgotten books had a great influence and impact on artists, professionals and amator and also on the advertising artists. As on schoolboys and girls. There is noting comparable to these books. I think. Great reading, full of pictures
Just score them on Bookfinder.com and you'll notice they are to be picked up at bargain prices. Postage included: The Art Teacher (1931), and Applied Art (1920)
Greeting and thanks again from a silent follower of your great Blog
Gerrie, Netherlands

hey evan -- thanks for your comment. i don't think it's an accident that every artist's bio opens with who they were a student of.

gerrie--how nice to hear from you! now i can thank you personally!

yes, i own one of lemos'sbooks; they're terrific, and appear regularly on ebay too. somebody has digitised one of them so that's always available.

but there are a number of other manuals -- most online, if i recall correctly: frank morley fletcher, hiroshi yoshida, walter j phillips, and others.

it's a shame that so little info about zonneveld is available; i can't believe there's no chronological record! on the other hand, there have just recently been "rediscovered!"-type exhibitions for a number of that era's printmakers; one for frances gearhart herself may actually still be going on in southern california.

so maybe there's hope for arie yet!

Hello again, thanks and I know of the free for all Ebooks. They are great. But nothing beats holding and owning the real thing.
Would you, could you send me jpeg's of the red cactus + the poppies/vase by William Rice ?
And there is hope for Arie, but maybe this will boost his international discovery and esteem.
Gerrie

you must be as old a i am, gerrie, to still appreciate the feel of real books. but not always the smell of them -- the 'applied art' i got smells of mold, and there is nothing that takes that out.

as for those images... why not just download them from here? if you'd rather go where i went to get them, go the the pomegranate.com store onlike and check their 2011 calendar!

p.s. i envy you your zonneveld collection!

"cuase they are rather "small" in pixels. Thanks for the adress.
My copies don' a have a moldy smell. If the did I'ld buy another one.
Gerrie (1954)
PS yes they are lovely, it's one of the fewer collected woodcut artists in the Netherlands. Now. Some sort of very local revival. Not many have emigrated before the '40's I am afraid.

oops! i am older. but you're old enough to still appreciate the finer things. :^)

i am the son of arie zonneveld.
i recognised the wooduts of my father.
i owe some prints

thank you so much for commenting. and welcome! i wish i could see your prints. please feel free to contribute any thoughts you would like. i'm sure we all would be interested in what you have to say.

Lily, I think this post should be labellled "Detective" too
Gerrie

thanks, gerrie! will do.

exquisite blog - thank you for all these beautiful posts

Thank you so very much.