one of my favorite mystery writers, stuart kaminsky, i recently learn, died. oddly, nobody told me. why should they? but....

this is one of the things about getting older about which no one would ever even think of mentioning, but to me it's surely emblematic of becoming part of a fading time.
i don't mean to be morose! not at all. if you're paying attention you notice stuff. that's all. young marrieds are nostalgic about stuff you grew up with. stuff like that.

you find that things that you knew were valuable -- everyone agreed -- now are unheard of. having not only been to woodstock, and seen the beatles in person, you were a groupie with roadies for both dr john and bonzo dog, and, like, what's cooler than that? they humor you with a quick smile, if they have even heard of any of these. your currency is no longer worth a thing, and you realize it probably never was! 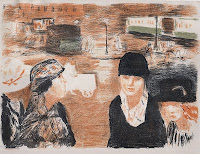 and it doesn't matter if it wasn't, either.

sometimes really finding out "whatever happened to..." completely breaks your heart. and sometimes something that you've forgotten having done gives a gift to someone you didn't meet till decades later. oh joy! 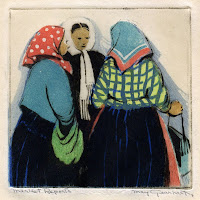 in the end, what point has there been in your life deciding what's important, what is not? aren't you going to change your mind some day and then feel yourself to have been a fool? are your memories filled with what you would have expected?

there's every chance you will be known then remembered by some impression you left, even if it was a misinterpretation, or a misunderstanding, or an attribution that was assumed but never deserved. in fact the chances of that lasting impression have anything to do with the real you are very very small. 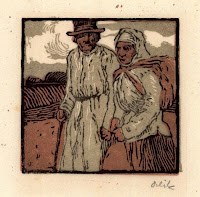 isn't that freeing? or is that a shade of green you're turning? and then you realize you must turn it around. did you ever know anyone at all? if your opinions, your agreements and disagreements, your mad dervish plans and your careful arrangements, looked silly one day, would that matter? 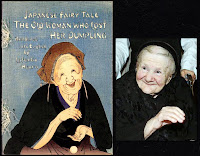 if you can't just laugh at this point, well then, i guess you just can't.

posted by lotusgreen at 7:01 PM

thank you. i think your reaction is perfectly appropriate!

"there's every chance you will be known then remembered by some impression you left, even if it was a misinterpretation, or a misunderstanding, or an attribution that was assumed but never deserved."

i love the words and meanings hidden in this and so many of your posts. i can't wait to get lost in your world.

thank you so much for stopping in and leading me to your wonderful world.

The heart of existentialism- shit happens, but does it matter? Values & what's of value have certainly changed. Family is important, but if you're in the same house with your parents as an adult, you're a loser. Who made that determination? Art permeates everything, but generally speaking, artists are humored & tolerated. No matter the effort, the time spent, the years dedicated, it's never quite work, so it's never quite legitimate, never quite valued on the same level as a "job".
We never quite know how we impact(ed) people. I discovered years later that one of the popular girls from my public school days thought I was a nice guy. Really? I thought I was invisible to her. Even later my father ran into a different girl from the same era who asked to be remembered to me. I asked him if he got her phone number. Nope. Her phone number was of no value to HIM, so it never occurred to him to ask. There are all kinds of moments I look back on- a useless occupation really, but still. Some folks never wonder about the roads not taken. Not me. I wonder all the time, even those those roads are long since gone. I look at the consequences of my decisions, good & bad. I ain't laughing, but even though my head might be shaking, I'm smiling.

thank you so much for getting what i'm talking about

great thoughts, evan. one watches false reality being created on the tv every evening at 6. i'm sitting here wondering ifi do that. i don't think i do.

like for example, i had once responded to an ad on a ride board about this woman who was going to mexico, where at that time i had never been. so we set up a plan to go together.

a few days before we were to leave i called her to cancel. i remember the reason -- a sudden fearful certainty that if i left town at that moment i would miss some REALLY BIG THING that was SUPPOSED TO HAPPEN.

i've never wondered what would have happened if i had gone, nor, until just recently, why we didn't meet ahead of time.

nothing "HAPPENED" during that time. just fear or ESP? well, i believed in past lives back then too. well, maybe i still do.

Fear, ESP or gut feeling? I find myself hesitating at green lights sometimes, & almost always, somebody runs the red. Maybe I saw then coming out of the corner of my eye.
I responded to the same sort of ad twice- first was a guy who wanted to get together with other artists, a coffe clatch. He had a more specific agenda, as was revealed when he called me drunk & self loathing. Was I familiar with Donatello's "David"? Yes, I was. He wanted to sculpt like that, only young David would have an erection. Ohhh-kaaay. Wonderful. A self-loathing pedophile who prefered boys. A The second was also for artists gathering to talk about artist stuff, but that devolved into mostly women talking about kids & family. The only other male in the group being a comedian, who didn't say much, but was evidently very amused by the conversation- he was busy taking notes.

Wouldn't you love to hear instead of "News at 6" "Reality as prepared by our sponsors at 6, brought to you tonight by the lumber industry. New research suggests a link between trees & air polution...Choose wood. Good fences make good neighbors"?

well, actually, the person i watch at 6 is rachel maddow, then followed by keith olberman. i really do trust the both of them to give me facts as opposed to, as you suggest, advertisements. and what i hear them report is on the staggering pile-up of misconceptions, manipulitions, and straight-out lies posing, these days, as the opposition party.

yeah...when I watch the news I tend to watch BBC, but sometimes think even they are a little...um...white-washed. 360 (Anderson Cooper) isn't too bad. If you truly feel the need to get pissed off at fiction passing as news, there's nothing better than Fox. If you want to really get incensed, a little Rush Limbuagh or Ann Coulter will get you there in a hurry. I always feel like I should be wearing rubber boots & carrying a pitchfork when I get an accidental ear-full of their b.s.

have you seen her before?

I have enjoyed this post as much as your conversation with Evan.

thanks, yoli. me too.

Your offering has nothing to do with currency, if it did I would be broke by now.

I was just reading your old post re: exercise motivation, argh....the old nemesis. Last night I saw a listing on ebay for a wonderful Art Nouveau photo album, the cover shows a pair of frogs playing tennis on lily pads, and I couldn't help but smile and think of you.

Thank you so much for your blog. It is beyond rich. Debra

P.S. I especially enjoy the dialogs between you and Mr. Apatoff (an also recently discovered source of vast riches).

thank you so much, debra-- your warmth permeates the net-o-sphere and starts my long weekend off well.

i love that word currency because of all its strangely different yet related meanings. to be current. money, of course. etc.

i have finally dealt with my exercise motivation. i've eliminate it. if i'm not in much pain and completely out of fat-free half & half, i'll take some excedrin and go to trader joe's, the only place i've found it. that (including everything else i have to get at trader joe's, and then a stop at petco because it's a few doors over in the same mall) is about as much exercise i'm able to get.

david, david, david. haven't visited him in ages. gotta go do that, then look for the album. it sounds charming and thanks for the heads up.

Arthur Miller once said that "Maybe all one can do is hope to end up with the right regrets."

By the way.... I personally would love to know more about being a groupie for Dr. John and Bonzo Dog - yeah, how cool is that!
Debra

that you've even heard of them makes my day. i think in 1969 detroit i was the only one who had.

debra -- i'veadded the email to the profile (it used to be on the old one which no longer shows on my page). someitmes your follow-up posts take things a bit more personal than i want to go, and i don't want you to feel insulted when i don't post them. please feel free to email if you'd like/.