japonisme: the nest of rapture

the nest of rapture 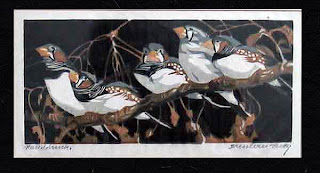 No one says
it anymore,
my darling,
not to the green leaves
in March, not to the stars
backing up each night, certainly

not in the nest
of rapture, who
in the beginning was
an owl, rustling
just after silence, whose

very presence drew
a mob of birds--flickers,
finches, chickadees, five cardinals
to a tree--the way a word
excites its meanings. Who 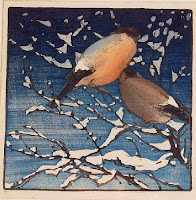 cooks for you, it calls, Who looks
for you? Sheaf of feathers, chief
of bone, the owl stands
upon the branch, but does he
understand it, think my revel,
my banquet, my tumult, 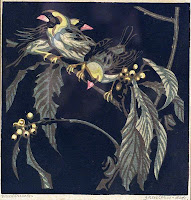 delight? The Irish have a word
for what can't be
replaced: mavourneen, my
darling, second cousin once
removed of memory, what is not
forgotten, as truth was
defined by the Greeks.

It's the names
on the stones in the cemetery
that ring out like rungs
on a ladder or the past
tense of bells: Nathaniel Joy,
Elizabeth Joy, Amos
Joy and Wilder Joy,

and it all comes down
to the conclusion
of the cardinal: pretty, pretty, pretty
pretty--but pretty what?
In her strip search
of scripture, St. Teresa
was seized, my darling, rapt
amid the chatter
and flutter of well-coiffed 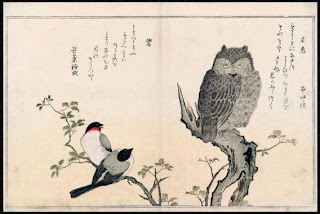 words, the owl
in the shagbark hickory,
and all the attending dangers
like physicians
of the heard.

so many love the bullfinch! a cross-cultural item of adoration. looks more like the grosbeak we have around here than any of our local finches, but still, who knew? this sweet little offering is dedicated to gerrie at his blog the linosaurus. his blog is the source for the top left image of this post, just part of the ongoing introductions to gerrie's finds in his tireless searches.

posted by lotusgreen at 8:32 AM

pardon, please! my poor record-keeping. if you know the artist where i've not listed it, please let me know. thanks!

I think the third one is not bullfinches but Java rice bird (by Fritz Lang) and the bullfinches (last but one) is bu Hugo Amberg. What a nice ensemble !

the bullfinch is by Hugo Amberg, I believe.

thanks to all, and i will make the corrections. really, gerrie, re the lang? they all look so much alike.

well... i'm sure you're right, but they clearly are all finches, even the grosbeaks!

yeah, but: some finches are more finches then others, arent they ? Thanks for the nice collection.

indeed. as they say, 'a finch in time saves nine,'and of course, "a finch in the hand is worth two in the bush.'