japonisme: boys will be boys

boys will be boys 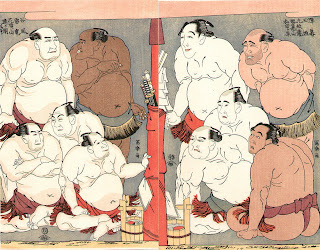 whether one looks at fighters or lovers, men engaged in the dramatic arts or simply men engaged in just about anything, one can clearly see that the image a man must show to the public depends largely on where he's from. this is the idea explored by jeffrey yang, of harvard.*

though the image of "he-man," in the west, seems ubiquitous, "Our findings suggest that Western men have a distorted view of what they ideally should look like, whereas men in Taiwan don't seem to have this problem," says Harrison Pope Jr., a professor of psychiatry at Harvard Medical School.

"Disorders of body image, including a pathological preoccupation with muscularity, are growing increasingly common among Western males, notes Chi-Fu Jeffrey Yang, a Harvard senior. "By contrast, such male body-image problems appear to be rare in Asian societies." 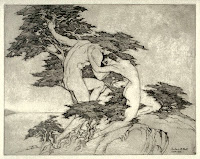 A few years ago, [Pope] and several colleagues gave a computerized test to male college students in the United States, France, and Austria. The students could adjust images of male bodies through 10 layers of muscle and 10 levels of fat. Asked to build bodies they thought would attract women, the males consistently layered on a lot more muscle than females preferred when they looked at the images. The Leonardo DiCaprio types were judged more appealing than the Sylvester Stallones.

The tests revealed that Taiwanese men show less dissatisfaction with their bodies than Westerners. They did not add as much muscle to build an idealized body. And they added a scant five pounds to make a body they thought would be a woman's ideal.

To reach their ideal, more and more Western men are resorting to anabolic steroids. The Taiwanese men Yang talked with had heard of the drugs but did not know anyone who actually used them.

What accounts for the difference in body images and drug use between East and West? Yang, Pope, and Gray propose a combination of three possible answers in their report, which appears in the February issue of the American Journal of Psychiatry.

Chinese culture places less emphasis on muscle as a measure of masculinity. Also, Asian men are less exposed to the unending images of pecs, abs, biceps, and triceps common in Western media. Finally, Taiwanese men retain a tighter grip on the traditional roles of household and corporate masters than men in the United States and other Western countries.

Western societies have equated muscles with masculinity from Greek and Roman statuary to modern television and print ads. There has been no such emphasis in Asia.

Yang, Gray, and Pope also call attention to other research showing that Asian cultures are being invaded by Western patterns of body dissatisfaction among women.

Two studies have shown that normal-weight women in Hong Kong and Polynesia want to be thinner. Another investigation in Fiji found striking increases in body dissatisfaction among adolescent girls in Fiji after television became widely available.

posted by lotusgreen at 9:17 PM

I find this very interesting and amusing. As I myself am very far away from the Stallone / Schwarzenegger ideal, I am not tempted to impress others by muscle mass etc.. But in my opinion, it doesn't really make a difference whether you try to show off by means of physical or intellectual features - a show-off is always a show-off, and a lot of the pseudo- intellectual, academical waffle that some people express seems just as distorted to me as Hulk's mountains of muscles. And by the way, will your next posting be about plastic surgery and breast enlargement among western women? ;-)

But what I like most in your posting is that pantheist etching by Perham Nahl!

I've just joined a gym, & during my last visit watched a very muscular guy engage in a few exercises that would have horrified my physical therapist- what never to do, with weights. On the list of goals they asked for when I joined was- I want to strengthen & stabilize my shoulders. I want to work on over-all increased strength & endurance. I am NOT, however, interested in how I look. I pretty much figure form will follow function, & functioning is my goal.
I love Yang's study & would probably agree with him 95%- right up until I looked at most shunga images. Evidently, even among Asians, size matters- or somebody's body dysmorphia is very specific.

but klaus! i thought *all* the other posts were about that! ;^)

i guess i was distracted by her painting initials onto his penis. i wondered if he were maybe going to camp and she wanted to make sure he came back with the right one.

klaus -- i wonder if you saw the final paragraph in this post. i thought i couldn't fit it in at first then i figured out a way to do that. it was only a couple of minutes after the original post, but if you somehow have the posts emailed to you, you would only have seen the very first version, and would never have seen the edits.