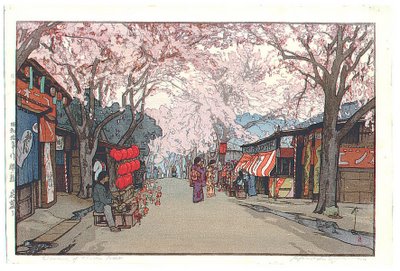 It is with the delicious surprise of the first journey through Japanese streets--unable to make one's kuruma-runner understand anything but gestures, frantic gestures to roll on anywhere, everywhere, since all is unspeakably pleasurable and new--that one first receives the real sensation of being in the Orient, in this Far East so much read of, so long dreamed of, yet, as the eyes bear witness, heretofore all unknown.

There is a romance even in the first full consciousness of this rather commonplace fact; but for me this consciousness is transfigured inexpressibly by the divine beauty of the day. There is some charm unutterable in the morning air, cool with the coolness of Japanese spring and wind-waves from the snowy cone of Fuji; a charm perhaps due rather to softest lucidity than to any positive tone--an atmospheric limpidity extraordinary, with only a suggestion of blue in it, through which the most distant objects appear focused with amazing sharpness.

The sun is only pleasantly warm; the jinricksha, or kuruma, is the most cosy little vehicle imaginable; and the street-vistas, as seen above the dancing white mushroom-shaped hat of my sandalled runner, have an allurement of which I fancy that I could never weary.

Elfish everything seems; for everything as well as everybody is small, and queer, and mysterious: the little houses under their blue roofs, the little shop-fronts hung with blue, and the smiling little people in their blue costumes. The illusion is only broken by the occasional passing of a tall foreigner, and by divers shop-signs bearing announcements in absurd attempts at English.

Nevertheless such discords only serve to emphasise reality; they never materially lessen the fascination of the funny little streets.

lafcadio hearn, 1891
how does that jibe with: "with lightning intensity, japan entered the modern era. clans were abolished in 1871; a railroad was opened... in 1872. ...in 1877 , telephones were first used..."1 development occurred in everything from the novel to bicameral government, to the development, as we have seen, of universities, sciences, warfare, much that the japanese felt the west had to teach. 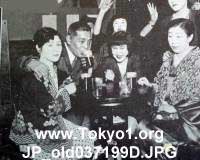 how does yoshida hiroshi's lovely view of a cherry-blossoming japan's women jibe with photos of how women really looked in 1935, when that print was made? 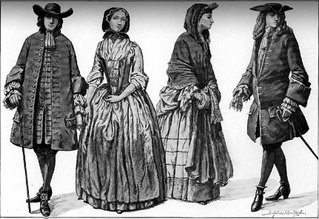 and lastly.... it's true, that in the 1600s, when the japanese cut off contact with the outside world, western women were wearing dresses. unfor- tunately, so were the men. 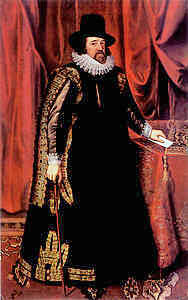 if the west had been isolationist for nearly 250 years, what would we have been wearing in 1853 when another culture sailed in and broke up our isolation?

no, i don't think hearn set out to mislead, i'd more suggest rosy-colored glasses. and yoshida only sought to sell his work: the producers of shin hanga realized no one really wanted to buy images of japan how it was beginning to look: they wanted to buy the fantasy. perhaps we still do.

posted by lotusgreen at 2:02 PM