"This design for Rajah coffee is a classic of Belgian Art Nouveau poster art. It was called Meunier's 'best work' and 'a masterpiece' by L'Stampe et L'Affiche in 1898. Appropriately, a strong coffee tone dominates the colour scheme" 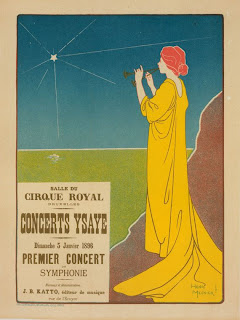 "Henri Meunier was an artist of exceptional purity. He took flat colours in flat tints and his thick outlines from Japanese prints to construct strong and clear images: 'With two or three pure colours, he fixes an impression that penetrates and imposes itself like the truth' justly notes Demure de Beaumont."

"As a poster designer, Meunier knew how to organize well-observed detail to create an almost musical ambiance…by compositions that are gravely meditative, clean and synthetic… 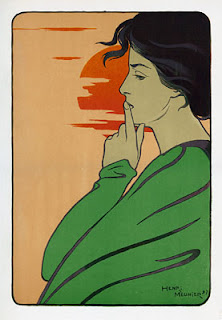 The Son of Belgian engraver Jean-Baptiste Meunier and nephew of sculptor Constantin Meunier, Henri seems to have come by his artistry in a genetic fashion. After completing brilliant studies at the academy in his native Ixelles, he went on to pursue many fields: printmaker, poster designer, graphic reporter and book binder. Oostens-Wittamer characterizes his poster work as focused on bringing out opposing light and dark values within his often large, contained, flowing masses of color"

Not unlike the Maitre de L'Affiche series, L'Estampe Modern was a portfolio printed between 1897-98, published by Imprimerie Champenois, Paris, contained 24 monthly portfolios, with four original lithographs in each. Each commissioned only for this series. As well as Mucha, some of the contributing artists included Rhead, Meunier, Ibels, Steinlen, Willette and Grasset.

"Meunier was the scion of a distinguished Belgian art dynasty: his father worked in copper, and an uncle was a sculptor… His design for Starlight soap, with the artfully synthesized design of a bathing child, two or three simple colours, are all he needs to get across a definite visual impact"1

despite all of this, and besides a few postcards, these are nearly all that remain accessible of his work.

posted by lotusgreen at 5:33 PM

Lotus dear,
What is the tale of the haunted flute? I must have one. Per usual I delight in the amazing text and imagery on your blog.

do you mean the horn that makes the star shine? if that's what you're referring to, i found this about the composer....