japonisme: the greater of the two?

the greater of the two? 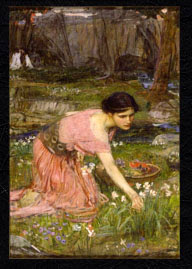 i came across a very interesting article about a museum exhibition in japan:

It can only be described as culture shock of historical scope. After 300 years of virtually complete isolation, the painters of a nation with its own proud artistic traditions--refined, diverse, inspired--were suddenly confronted with paintings showing scenes of unknown lands with a realism that they had never imagined within the realm of painting, and executed in paints capable of a seemingly impossible range of nuance, even transparency. 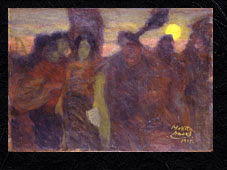 Even if a similar culture shock was occurring on the other side of the world at about the same time, as European painters were enchanted with the intriguing perspectives and creative use of color in Japanese ukiyo-e prints, the shock of the Japanese painters must surely have been the greater of the two.(page no longer available.)

the translated version of the page about the exhibition is here.

the images here are by john william waterhouse (apparently untranslatable), a painter clearly in both the pre-raphaelite and impressionist camps, with a look clearly quite different from what the japanese artists were doing.

the second i'm afraid i can't figure out the name of the second artist, but i believe i can see influences of van gogh and even the nabis.

posted by lotusgreen at 4:41 PM