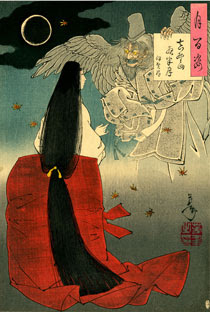 Hambrecht Gallery Features a hundred prints by Taiso Yoshitoshi (1839–1892) dating from the turbulent last decades of Edo Japan to the westernizing Meiji era. The exhibition is built around two series that deal with the supernatural, one from the beginning of Yoshitoshi’s career, the other from the end—stylistically so different that they could be by different artists. Sometimes considered ancestors of modern manga (Japanese comics), woodblock prints were known as ukiyo-e, pictures of the “floating world” of entertainment, especially of actors and courtesans. Yoshitoshi preferred other subjects, including events from folklore and history, often bloody. Colors are intense, gestures histrionic. In his later designs Yoshitoshi moved beyond the swirl of momentous events to portray human emotions with great psychological subtlety, which is his most important contribution to ukiyo-e. Through his work, a picture emerges of traditional Japanese society moving at a breakneck speed into the modern world.1

In celebration of "National Museum Month," Bank of America today launched the tenth season of Museums on Us(TM) by introducing the program in California. This expansion - the largest in the program's decade-long history - enables anyone with a Bank of America credit or check card or MBNA credit card plus one guest the opportunity to visit 86 of the nation's finest cultural institutions on both coasts for free during the month of May.2

posted by lotusgreen at 9:40 PM

I have to see this.

yeah! and there're the french jewelry show and the french "design and decadence" show both at the legion of honor throughout may as well.

i wonder what's at the other museums around the country.