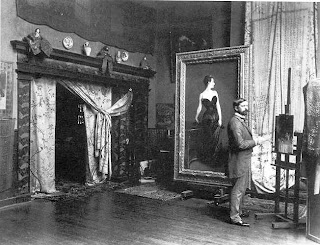 "This is Sargent's studio at 41 Boulevard Berthier, Paris. He moved here in June of 1883. On the 23rd of that month Vernon Lee visited and then wrote to her mother regarding the place. The studio did have some history to it as it had previously been occupied by Alfred Stevens (Belgian painter in Paris, 1823–1906). 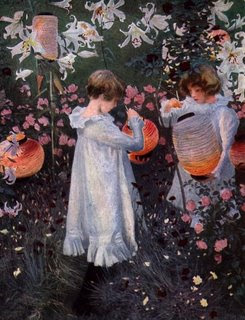 The photo was probably taken right before the Salon of 1884 (though I'm guessing). His painting of Madame X is to his left and appears ready for show. On the easel which he faces, is the painting of his sister he did in January called The Breakfast Table. Behind Madame X, and hanging on the wall, is Dwarf with a Mastiff, which was a copy after Velázquez's painting which he made at the Prado in Madrid. The porcelain dolls sitting on the mantel over the doorway and the tapestries are reflective of Sargent's taste in the modern movement and attitudes prevalent in Paris at the time for all things Japanese -- especially prints. This profoundly influenced the Impressionists (the influence was called Japonisme)." 1 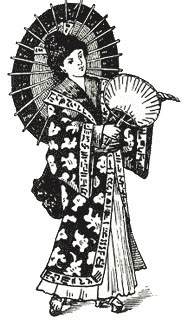 run by "natasha the ex-seamstress," clearly a woman with a deep connection to the mikado, the site is an astonishing, comprehensive, and wonderful encyclopedia on sargent, which will take me quite a long time to learn everything there is to learn from it. 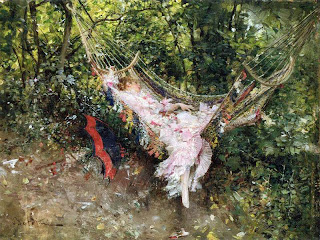 so far, among other things, i've found another hammock, this time by giovanni boldini.

posted by lotusgreen at 7:36 PM

merci--it's amazing how many of so similar of a painting was done.

Do you believe in reincarnation?

Boldini is one of my absolute favourites. Ooo, I'm so delighted to see him featured. I have one of his pieces in queue for my blog header image.

ph: you don't get to ask a question like that without an explanation!

cool, imani--yeah--i was happy to discover him because i liked so many of his things.