japonisme: what about mary cassatt?

what about mary cassatt?

well, having just posted that lovely photo of sargent in his studio with his japanese dolls, i thought it would be interesting to see if i couldn't find examples of other artists with japanese prints, or ceramics, or kimono, or dolls, or whatever, from their collections. 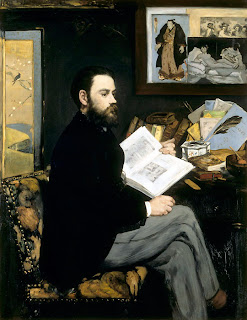 so far not so successful, but i intend to keep looking and if you know of any, please let me know! thanks!

Interest in Japanese art and culture was ... propagated by French writers including the Goncourt brothers and Emile Zola. By the end of the nineteenth century, "Japonisme" had developed into one of the most important artistic movements of the time.1

zola (painted by manet) had a collection of spring painting on the walls of his staircase leading up to his bedroom, and collected asian objects which were showcased around his house. 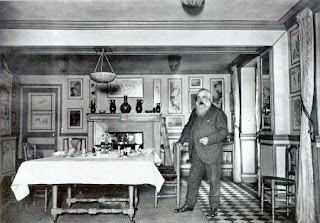 [we know] monet collected Japanese prints because there were 140 found at Giverny after his death. Some had been care- fully framed and hung on the walls, while others were faded and torn with various layers of wallpaper stuck to their backs, suggesting that Monet simply cut them off the walls when he moved from one house to another. That he kept them for nearly fifty years is proof enough of their inspiration for him.2 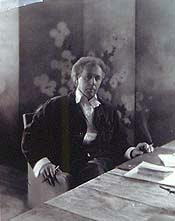 [Frank Lloyd] Wright began purchasing Japanese prints around 1900 while living in Chicago, but expanded his collection greatly during his many trips to Japan between 1905 and 1922. He continued to buy and sell prints until his death in 1959. The Norton Simon Museum’s permanent collection contains more than 350 prints from Wright’s collection, which he amassed over a period of 50 years.3 and we have seen this portrait of tissot by degas, before, along with some of his examples of french young women discovering japanese artifacts. but it bears repeating. 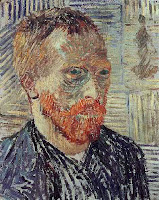 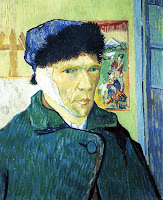 and van gogh painted himself not once but at least twice with a japanese print.

that's it for now, but i really do hope to find more.