japonisme: the look of the light

the look of the light 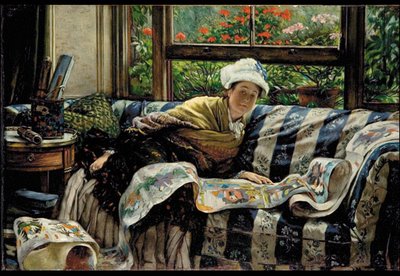 while he is less well-known than his two close friends manet and degas, james jacques tissot gave us something important in these two of his paintings: the dawn. while all three artists were avid followers of the japonisme craze, none of the the three featured the work in their own as much as did, say, whistler, monet or van gogh.

much of tissot's work was of 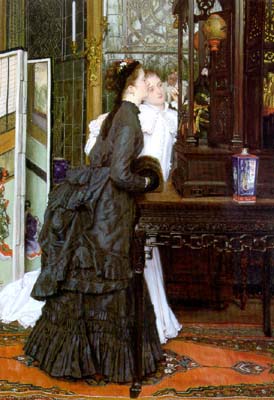 upper-crust society, the wondrousness of costume, the vapidness of content, and of the love of his life, a one mrs. newton (divorced) with whom he lived for only 6 years until she died of a consumptive suicide at the age of 28 (after which tissot spent the rest of his life painting some 700 illustrations of the bible). still, in much of it one sees the strong diagonals of the japanese prints. and to the extent that the japanese prints often featured ladies in the latest extravagant fashions, perhaps this is a corollary as well. further, upon occasion tissot (as well as his friends) would sneak a hung-on-the-wall example of ukiyo-e into a portrait.
but i don't recall any other painter offering us a glimpse into that moment of discovery: the first sighting of lady liberty over the bow of the ship, as the west discovered the wonders of the east. 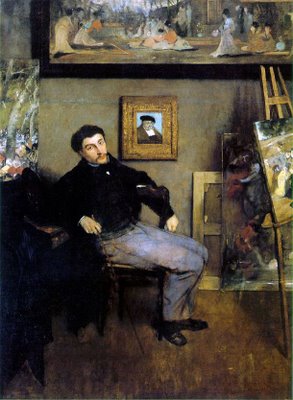 in one description of degas' portrait of tissot, it said that it was tissot's own 'ukiyo-e' that hung on the wall behind him, but i could find no other reference to it.

Yet another fascinating insight, Lotusgreen. Thanks for all the details about Tissot.
People normally concentrate on the era when he enjoyed great success

BTW, You must have a look at the Mystery Painter post on Articles & Texticles, here: http://www.articlesandtexticles.co.uk/?p=202
It's dedicated to you!