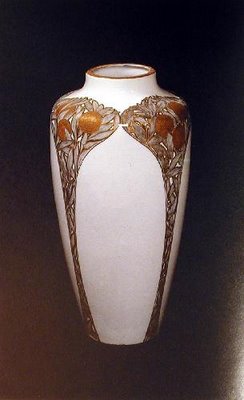 i am very lucky, living in california, for many reasons, including its having been an area of great creative activity during the 'arts and crafts movement.' i put that in quotes because there is a tendency to block off all of these 'movements' into separate parts, as though they were truly distinct, without their tendrils and roots all tangled together, which of course they were.

in barcelona, they were called 'modernistas'! whatever they were called, an exhibition honoring them will be happening at the cleveland museum of art from october 15th 2006 until january 7 2007 (and from march 5 2007 to june 3 2007 at the metropolitan museum of art in new york). on the cma webpage i found this vase.

created in 1907 by antoni serra, one of catalonia's leading 'modernista' ceramists, this vase reminded me of something. 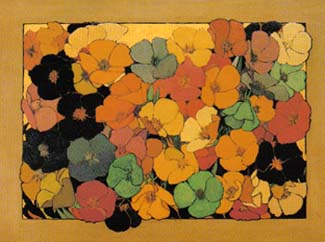 at the oakland museum in california is perhaps the world's best collection of california arts and crafts from this era. while they have an extraordinary tonalist painting collection (due in part to the work of harvey l jones, just retiring), they also have the largest collection of the work of arthur and lucia k mathews, and will be exhibiting it this year, october 28 2006 to march 25 2007. (pomegranate is putting out a mathews calendar as well.)

i think this is a huge and wondrous coincidence, because when i looked at that vase, i immediately thought of arthur and lucia mathews! the colors, the oranges, the leaves, these are exactly what you see on some of the work of the mathews, and i realized again how strongly what you find on these arts is what you find where they are made. this is why there are individual temperaments in the "different" movements, not because they are different, but because they are so wonderfully diverse.