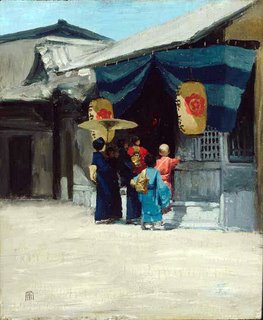 mortimer menpes spent the final years of his life as a farmer, growing fruit and carnations.1 but before he retired to the country, his life was the stuff of dreams (though, in truth, perhaps the farm was a dream as well).
after moving to england from australia, menpes was swept into the japonisme craze. he became whistler's apprentice and helper. but unlike whistler, menpes actually went to japan, and he went more than once.
In his paintings of Japanese daily life, Menpes explores the subtleties of Japanese art, emulating the balance and perfection which he saw all around him and describes in some detail in his notes accompanying his illustrations in Japan A Record in Colour. Menpes admired the Japanese painters who would ponder for hours and sometimes weeks over the placing of every last object in their paintings. The proper placing of objects is not only an exact science, but also it forms almost a religion with the Japanese. When you just arrive in Japan you are at once impressed with the perfect placing of everything about you."2 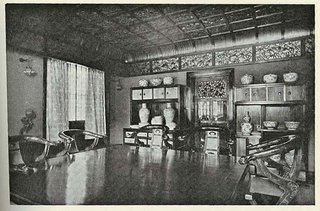 The cabinets of purely Japanese character in the dining-room ... are charming in their frank simplicity, and greatly to be preferred to the over-elaborated and decorated cabinets with their carved ivory and pearl inlays which have been made in recent years by the Japanese for the European market.3 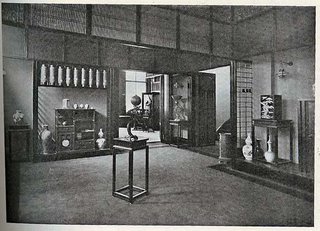 one of menpes' trips to japan was deliberately to work with craftspeople to manufacture things for his home. menpes felt much western work was shoddy and was seeking the fine hand craftsmanship of japan.4 unfortunately, whistler (not uncharacteristicly) blew into a rage and fired menpes for having stolen japonisme ideas from him!

posted by lotusgreen at 7:54 PM