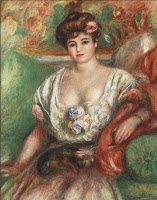 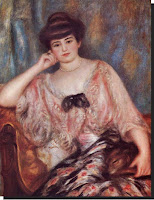 renoir wanted her to expose her breasts a little more. she refused, but in later years regretted it. 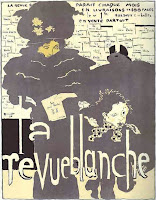 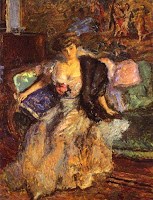 bonnard obviously had a similar attraction, but when her husband (she married at 15) began la revue blanche, his portrayal became a lot more graphic. 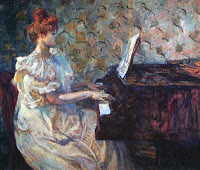 toulouse lautrec idolized her as well, as she invited him, and his friends, and the rest of the artists, musicians, composers. poets, invited them all to become a part of her family through the salon. a prodigal pianist, misia (she had four last names, a serial wedder) also invited pianists to the salon. 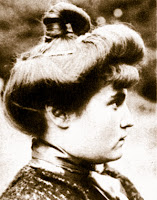 of all of her admirers (well, i don't know about her husbands) vuillard's emotions proved, perhaps, the deepest. "One of the most striking and memorable works in the exhibition is 'The Nape of Misia's Neck.' The catalogue maintains that Misia was Vuillard's 'great secret love' and provides the following quotation from her memoirs: 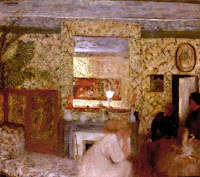 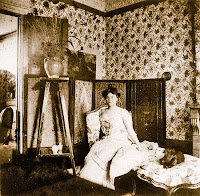 'The echoes of this agitation (the Dreyfus affair) reached me at Villeneuve, and I decided to leave for Paris earlier than usual. Vuillard then said he wanted to take a last walk along the banks of the Yonne, and we started at dusk. 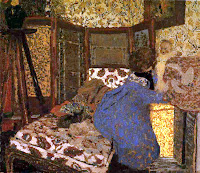 Looking dreamy and grave, he led me beside the river amongst the tall birches with their silvery trunks. He moved slowly over the yellowing grass, and I fell in with his mood; we did not speak. The day was closing in rapidly so we took a shortcut across a beetroot field.

Our sil- hou- ettes were insubstantial shadows against a pale sky. The ground was rough, I tripped on a root and almost fell; Vuillard stopped abruptly to help me regain my balance. Our eyes met. In the deepening shadows I could see the sad gleam of his glance. He burst into sobs. It was the most beautiful declaration of love ever made to me.'"1

vuillard painted a series of four panels for the walls of the salon misia shared with her husband, their home, and longed for her; he lived at home with his mother until he was 60, when his mother died.

draw your own conclusions: misia was painted by more than these four, and by each far more times than i illustrate here. her beauty has been invoked, her brightness, her charm and wit. her warmth invited them into her family, her husband invited them into his magazine, and she, with sarah bernhardt and loie fuller is now memorialized, and is known by us all.

posted by lotusgreen at 9:10 PM

I recall reading a biography of Misia many years ago... probably still the only one out there. I hadn't realized that she was the model for some of these, though.

You're now nominated for Thinking Blogger Award, details at http://calypsospots.blogspot.com/2007/05/thinking-blogger-award-is-upon-us.html!

Lotusgreen,
Congratulations on being nominated for Thinking Blogger Award. You certainly deserve it as you have real scholarship on your beautiful space. I have noticed you linked in different spaces where I visit; see you are getting around!

yes, i hadn't realized either that they were all the same person, and these are just the tip of the iceberg--there are so many more. i want to read that biography.

thank you too princess. i feel indeed honored!

I don't know the author's name, but did run across a reference to the book not that long ago. I suspect a good library would have it.

yes--thanks--i found it and put in a reserve--perhaps it is winging its way towards me at this very moment! :^)