although its practice was known in china and korea before it was seen in japan, the art of bonsai, as we in the west have come to know it, is certainly the japanese strain. though it is said that the practice originated as an easy way to transport medicinal herbs, it must be added that the singularization and stylization of nature occurred not only on a miniature scale.

as seen in yesterday's examples from japan, art was never limited to the creations of humans, but was included as well the creations outside the hands of humans. gardens featured stylized mountains and oceans; and real trees were stylized as well. though what we see in the western images of stylized trees were inspired by those in the japanese prints, in the japanese prints themselves they were often featuring what they literally saw. 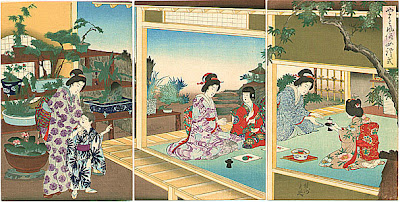 The most frequently cited example of mono no aware in contemporary Japan is the traditional love of cherry blossoms, as manifested by the huge crowds of people that go out every year to view (and picnic under) the cherry trees. The blossoms of the Japanese cherry trees are intrinsically no more beautiful than those of, say, the pear or the apple tree: they are more highly valued because of their transience, since they usually begin to fall within a week of their first appearing. It is precisely the evanescence of their beauty that evokes the wistful feeling of mono no aware in the viewer. 1 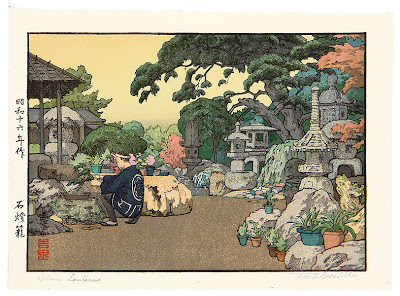 A distinctive Japanese convention is to depict a single environment transitioning from spring to summer to autumn to winter in one painting. For example, spring might be indicated by a few blossoming trees or plants and summer by a hazy and humid atmosphere and densely foliated trees, while a flock of geese typically suggests autumn and snow, and barren trees evoke winter. (Because this convention was so common, seasonal attributes could be quite subtle.) In this way, Japanese painters expressed not only their fondness for this natural cycle but also captured an awareness of the inevitability of change, a fundamental Buddhist concept. 2 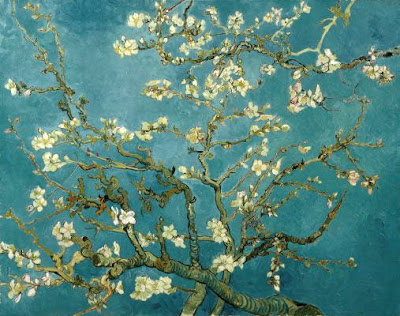 As previously noted, the garden as we know it came to Japan from China. During the Han Dynasty, the emperor Wu Di (140-87 BC) established a garden containing three small islands, mimicking the Isles of the Immortals, who were the principle Taoist deities. These gardens of lakes and mountains became the standard of the day, always representing (in abstract) the fabled lands of legend. There was no effort made to approximate nature; it was stylized into something otherworldly. In 607AD, the emperor Yang Di opened relations with Japan, and received the first envoy, Ono no Imoko, at his lavish park. Imoko returned to Japan with many ideas (including Buddhism), and four years after his return, the first hill and pond garden was established in Japan. 3