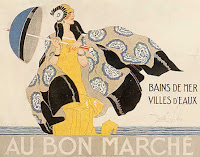 i'm always surprised when an artist who has come to occupy the realms of greatness in my mind is so difficult to find any information about. forgotten, but for their work. i suppose any of them would prefer that than the opposite?

Rene Vincent (1879-1936) is best known for a number of posters displaying art deco luxury goods. Often large-scale, they delivered high-impact deluxe inducements. But Vincent was not only a child of the Belle Epoque but also one of its graphic practitioners, and that factor accounts for the dramatic wit of his vignettes, which were also elegant, lighthearted, stylish and sophisticated. 1

pseudonym: Rageot
Born in 1879 in Paris. Died in 1936 in Paris.
XXe century. French. Painter with the gouache, painter in watercolours, draughtsman, poster artist.

Brother of the painter Henri Vincent-Anglade. He initially studied architecture at the School of the Arts in Paris. He travelled to the United States.

Vincent's drawings included delicate watercolours, illustrating various modes of society life, from 1900 until the style “Arts Déco 1925”, at which time he became one of its best known practitioners. He worked with many parisian magazines. He is especially known for his posters advertising the first cars: Bugatti, Peugeot. In this field, he illustrated and Henry Kistemaeckers wrote the text. He also was an illustrator of books; in 1908 the Marriage of Rag of Gyp; in 1909 Aéropolis, comic novel of the air life of Henry Kistemaeckers; in 1912 Small girls of the last time of Joseph Jacquin; in 1934 historical Evils XI: Around fifty (an evil which spreads Ja terror) of Henri Duvernois. He created posters for Balto cigarettes, the department store Au Bon Marche, and the source Évian-Cachat He had many imitateurs, especially in the field of the advertising poster. 2

(this i edited from a babel fish translation from the dutch. still not sure it makes sense....) 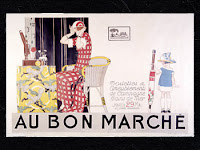 René Vincent (1879 - 1936) was the son of a writer and he began his career as an architect. A short time after this experience he entered into advertising and publishing. He was also an illustrator for some famous French newspapers (Le Rire, Fantasio, La Baïonnette, l’Illustration, Paris-Magazine, Lectures pour tous, Fémina, Nos Loisirs…etc)

In the beginning of the 20’s, René Vincent created many posters particularly for the automotive market (Bugatti, Peugeot, Georges Irat …etc). He also worked for “Le Bon Marché” Parisian store and the printer Draeger. He was a major actor of the Art Déco period. 3 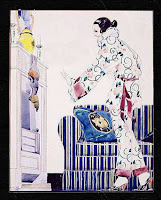 a clear beneficiary of the japonisme legacy, with his outlines, flat solid color, and wonderful prints, and even the kimono-like costumes, vincent carried through doing this work as it began to take the shapes of the thirties when he apparently worked until the day he died.

posted by lotusgreen at 8:04 PM