japonisme: so many soaps.... 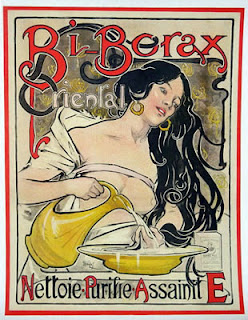 Personal cleanliness was one of the most signi- ficant Japanese virtues for the West, and ex- ploited by makers of soap, perfumes, and so on. At a time when a weekly bath was con- sidered adequate for most Americans (and the British Pears' Soap ads promoted daily washing of the face as something desirable but not uni- versal, in a series of ads asking "Have you used Pears Soap today?"), the Japanese were reputed to bathe daily. 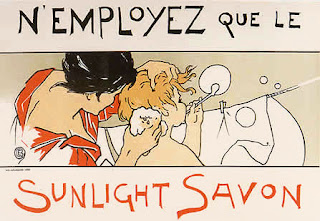 Accounts of this practice included such novelties as communal bathing, bathing outdoors with no attempt at screening the body from the sight of passersby, bathing in boiling hot water, and bathing several times a day. This could be seen as disgusting, as in an 1863 article in Harper's New Monthly Magazine ("Pictures of the Japanese," Nov. 1863, anonymous but based on Rutherford Alcock's book The Capital of the Tycoon), where a discussion of prostitution (the "Social Evil") is followed by this comment: 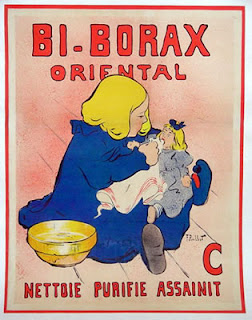 The bath is also a great public institution in Japan. Men and women bathe together in a manner which shocks all our ideas of decency. As far as their persons are concerned the Japanese are certainly a very cleanly people. But this does not hold good of their garments. These are worn day and night, and rarely changed. This, together with the habit of promiscuous bathing, renders cuta- neous diseases extremely prevalent.... 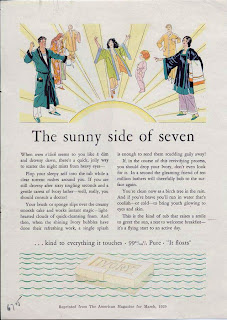 A sincere horror at the idea of public or mixed-sex bathing was probably a com- mon reaction -- a sense that promiscuous bathing was intrinsically lewd and must inevitably involve promis- cuous sex. Other, more enlightened observers de- cided however that the nudity involved might after all be innocent, since even young women seemed to be no more aware of indecency than would a child. The Westerner's horror of immo- desty could be the basis of comedy in travelers' tales, as in this passage about a young York- shireman working in the British legation in Tokyo, from Mrs. Hugh Fraser's story "In Tokyo" (in The Custom of the Country, 2nd ed., 1899, pp. 31-32): 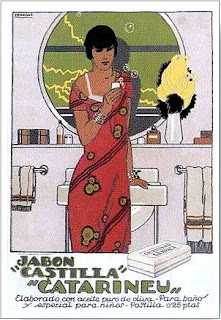 Some things shocked his un- tried prudery beyond words. It would be difficult to de- scribe his feelings when, as he was walking, tired and dusty, through a hill village, an old woman, paddling in her bath in sight of all beholders, called out to stop him as he passed.
"What does she want?" he asked of his guide, glancing with a visible shudder at the aged bit of humanity (brown as a last year's oak leaf, and innocent of clothes as a fish in a tank) which stretched an arm to him from a steaming tub.
"She very kind woman," the guide explained, "she say, young gentleman tired, dirty, bath plenty big for two people; please get in!"....
Yet the old woman had offered him the one kindness of which he stood in need, according to her lights. 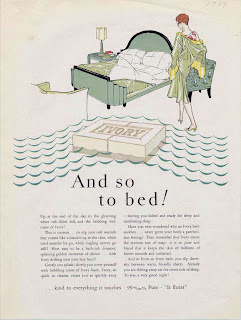 In the above quotations we see a kind of startlement that the Japanese, heathen as they are, should in this practice be possibly superior -- morally superior, if "cleanliness is next to godliness" (as an 1883 Pears Soap ad quoted Henry Ward Beecher as saying) -- to Western Christians. It seemed necessary to make a joke or find an un-godly aspect about this embarrassing possible superiority. Advertisers could however exploit this by making it clear that Americans needed to "catch up." 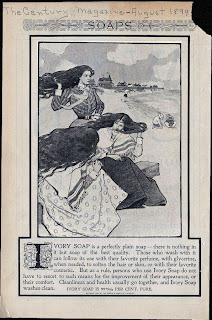 ...At any rate, in the West the purchase of a bar of soap uniquely for personal cleansing was a luxury. All-purpose soaps, often home-made, were more common; however, by the mid-19th century manufacturers like Pears and Lever in England, and Proctor & Gamble and Kirk's in the U.S., were marketing soaps to be used only on the human skin, promising gentle- ness, softness, whiteness, and other desirable qualities.... 1

(this woman has assembled such an extraordinary, and vast, website; this is but a teensy corner, and no corner is any less interesting. in addition to beauty and scholarship and delight, you'll find fascinating political analysis. there is no small amount of irony in her ostensibly simple comments.)

Fascinating and beautiful essay as usual. You are an inspiration. Thanks.

thanks liza--yes! i was delighted, and surprised a little, to find it on her site. i didn't remember seeing it before (of course nowadays half the time i don't remember what i saw yesterday ;^)

then i realized that she, like most people on the web, has added to her site. so i ask you, how is one to keep up??!!!

Lotusgreen, I like to think I'm reasonably sensitive to the limits of my cultural blinders, but I have a hard time accepting the author's notion that adult men and women bathing nude together shamelessly would be no more aware of the potential for mischief "than would a child."

By contrast, Lewis Mumford suggests that the great renaissance, with its focus on the human body and eros as the centerpiece of paintings and sculpture and science, was the result of mass produced and affordable soap and water. Bathing didn't make them more innocent. As soon as the west scrubbed off that medieval stench, they became fascinated by all of the juicy possibilities.