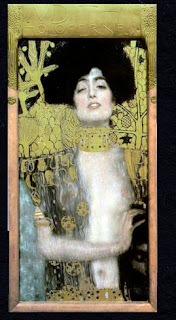 almost every artist here has been featured in this blog before. can you guess who the artist is without looking?

what a day it's been. i had a rising feeling of discontent as i thought more and more about the inherent misogyny in this story, and how at the moment when women shed their corsets they became frightening on a new level.

of course, this myth, the woman with the 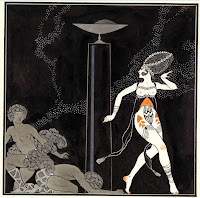 knife, with the scissors, wasn't born then. salome is an ancient tale, and the form takes so many names: delilah, for one.

THE SEVEN VEILS OF SALOME

I was standing in the doorway
when he reproached her.
Not with words, but a simple
absence of attention: She was smiling,

holding out a slip of meat, skewered fruit--
some delicacy he'd surely never seen
in all his dust-blown, flea-plagued
wanderings--and he stared at it
for the longest while,

as if the offer came from it and not
those tapered fingers, my mother's
famous smile. He said nothing,
merely turned away his large
and beautifully arrogant head.

Herodias, in the Doorway.

More than anything I ache to see her
so girlish. She steps languidly
into their midst as if onto a pooled expanse
of grass ... or as if she were herself
the meadow, unruffled green
ringed with lilies

instead of these red-rimmed eyes,
this wasteland soaked in smoke and pleasure.
Ignorant, she moves as if inventing
time--and the musicians scurry
to deliver a carpet of flutes
under her flawless heel.

I should have avoided this, loving her mother
as I do, to the length and breadth of my kingdom
even to the chilly depths of history's wrath.
But it was my birthday; I was bent upon
happiness and love, I loved
Herodias, my Herodias!--who sends 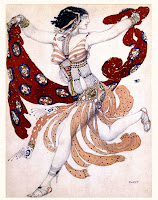 her honeyed daughter into the feast.
The first veil fell, and all
my celebrated years
dissolved in bitter rapture. O Herodias!
You have outdone us all.

The Fool, at Herod's Feet.

Just a girl, slim-hipped, two knots
for breasts, sheathed potential
caught before the inevitable
over-bloom and rot (life's revenge
if death eludes us)--all
any of us men want, really.
Just a girl. Otherwise,

who can fathom it, how is it
to be fathomed? At his behest, her mother's?
It matters little--she was dispatched
into the circle of elders, and there
she rivets the world's desire.

I have a head on my shoulders
but no one sees it; no one
reckons with a calculated wrist or pouting underlip.
I've navigated this court's attentions
and I will prove I can be crueler than government,
I will delegate what nature's given me
(this body, this anguish,
oiled curves and perfumed apertures),
I will dance until they've all lost their heads--
the nobles slobbering over their golden goblets,
the old king sweating on his throne, 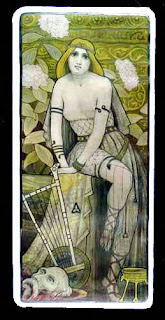 my mother in the doorway, rigid with regret,
the jester who watches us all and laughs--

O Mother, what else is a girl to do?

RITA DOVE served as United States Poet Laureate from 1993 to 1995. Among her many literary and academic honors are the 1987 Pulitzer Prize in Poetry and the 2001 Duke Ellington Lifetime Achievement Award. Her most recent poetry collections are Mother Love and On the Bus with Rosa Parks.

This is an amazing post, Lotus. There is a new movie out on Klimt BTW. Not wonderful but interesting with John Malkovitch.