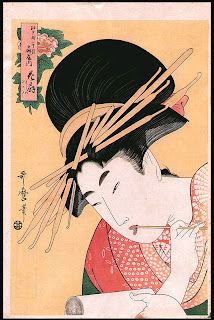 new orleans had its storyville, paris montmartre, and edo had the yoshiwara. the last two, anyway, shared several things: a severe ranking system, a prominant (and defining) social presence, and an opportunity for the brilliant and talented woman to gain the world outside the home.

in these prints we see poets, painters, musicians, writers; were you to go looking for them during this edo era, you would only find them in courts, and in courtesans.

The great majority of Japanese women who succeeded as artists were also talented poets. Because so many noblewomen of earlier ages were renowned for their novels, dairies, and poetry, the Edo-period literary world was prepared to accept women. Those who won the most popular acclaim did so because their talents were visible to the public. Many were courtesans, employed in one of the few vocations in which intelligent women of the plebian classes were encouraged to display their talents. Within this profession there were many levels: At the bottom were low-class prostitutes, but at the top were exceptionally talented women skilled in traditional poetry, calligraphy, and painting. 1 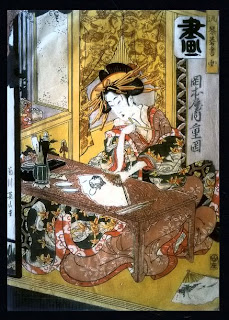 The licensed pleasure quarter of Edo, Yoshiwara, famed for its government-sanctioned brothels, kabuki theater, fashionable restaurants, and street entertainment, was a principal inspiration for many Ukiyo-e artists. It was here -- in this "floating world" of pleasure and entertainment -- that the confines of social class could be pushed aside. Various forms of entertainment, particularly kabuki theater and the pleasure quarters, lured monied patrons who were eager in turn to acquire the vivid images of celebrated actors and exquisite courtesans created by Ukiyo-e artists.

The high-ranking courtesans from Yoshiwara are identified on each print by their names, the houses in which they worked, and the locations of the houses. Gorgeously attired from their elaborately coiffed hair to their lofty platform shoes, these women create a dramatic impression. There were several parallels between kabuki actors and high-ranking courtesans during the Edo Period, including the use of hereditary names that could carry the caché of celebrity down through generations. 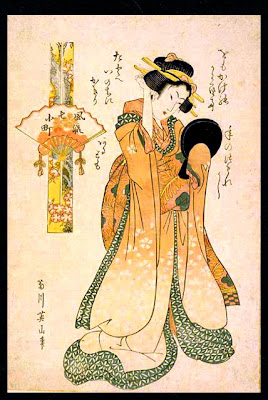 This print by Kikugawa Eizan (1787-1867) depicts Ono no Komachi (ca. ninth century), a celebrated poet, famed also for her spectacular beauty and its decline in her old age. The translated inscription on this print reads:

Even if we say life is limited,
The accumulating years would not matter
If one's appearance did not change. 2

(though i could find no other clear evidence of it, she is clearly depicted here as a courtesan.)

Is this love reality
or a dream?
I cannot know
when both reality and dreams
exist without truly existing. 3

(also by ono no komachi)

Collectors and connoisseurs sought out verses written by eminent courtesans like Ohashi, who was active in the mid-eighteenth century. In her poems on decorated paper, Ohashi positioned the words beautifully, the lines of writing bridging the division between the upper blue field and the plain paper below. Heavily inked strings of characters deftly balanced against lighter ones created when her brush began to run dry. Her poem refers to the inevitable parting between lovers at dawn, and the sadness that follows. 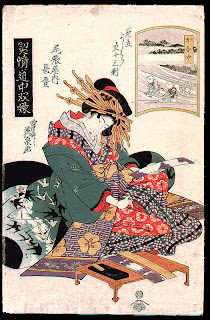 "On the morning after,
Let your parting
Be like a dream."
I cannot forget
The wretched cry of the bird. 3

There were, of course, varying degrees of courtesans, and, as a rule, it is only those of the highest class, called oirans, that are represented in prints. 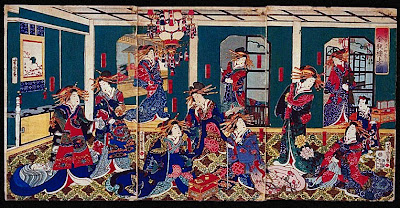 The dress of all courtesans, particularly of the oiran, was of a splendour wholly different from the costume of the ordinary woman, and their coiffure also was of a very elaborate nature, which was built up upon a light frame and kept in position by a regular forest of light metal or wooden pins, which framed the head like the halo of a saint in a stained-glass window. 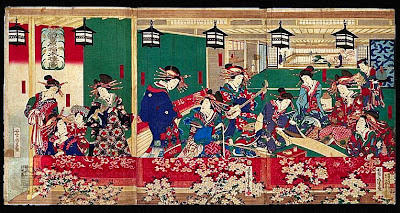 They were further distinguished by wearing the sash (obi) tied in front, whereas all other women, including geisha (dancing and singing girls), tied them with the bow behind. It is often in the decoration of the obi that we find the most elaborate and brilliant designs, even in a costume which is gorgeous throughout. 4 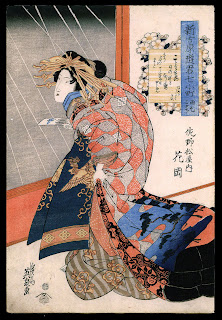 the stresses of setting style may have been set aside by a sense of sisterhood, and some oirans commanded enough to bring down a castle in exchange for an evening's pleasure, but as with the women in montmartre, in storyville, they were surely stars, but stars of a ghetto.

posted by lotusgreen at 7:31 PM

This is one of your best posts. I love the poetry of Ono no komachi and the legends about her are so wonderfully ghostly.

"they were surely stars, but stars of a ghetto"

All that glamour, but in the end...

This whole series has been both beautiful and fascinating. Thanks so much for all your research and your ever keen eye.

i can't tell y'all how much your comments mean. i'd've responded sooner but my thumb has been hurting.

princess--thanks--it's neat when you share cultural references... it adds something

htgt--thanks so much! yeah--the whole thing is so interesting from a feminist standpoint, isn't it?

liza!-- that's really kind of you to say, and to recognize.

Yes, yes, this series was excellent which, really, reflects the overall quality of your magnificent blog. Therefore when I had brief contact with the proprietor over at Art Magick I had to slip a mention of your blog into the convo. ;) And so I see you've been duly blogrolled! Just wanted to let you know. :)

well how cool is that! thank you!

and for your sweetwords as well

Thanks, Lotus, but it's certainly difficult to add anything to your amazing posts.