japonisme: japonisme in the land of the pueblo (etc.) V

japonisme in the land of the pueblo (etc.) V

"Where are the blossoms of those summers!
-- fallen, one by one;
so all of my family departed,
each in his turn,
to the land of spirits.
I am on the hilltop and
must go down into the valley;
and when Uncas follows
in my footsteps there will
no longer be any of the
blood of the Sagamores,
for my boy is
the last of the Mohicans,"
Chingachgook spoke to Hawkeye.

winold reiss grew up in germany poring over the tales of james fennimore cooper. 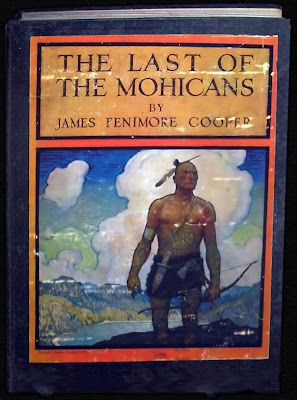 While Hawkeye and the Indians lighted their fire and took their evening's repast, a frugal meal of dried bear's meat, the young man paid a visit to that curtain of the dilapidated fort which looked out on the sheet of the Horican. The wind had fallen, and the waves were already rolling on the sandy beach beneath him, in a more regular and tempered succession. The clouds, as if tired of their furious chase, were breaking asunder; the heavier volumes, gathering in black masses about the horizon, while the lighter scud still hurried above the water, or eddied among the tops of the mountains, like broken flights of birds, hovering around their roosts. Here and there, a red and fiery star struggled through the drifting vapor, furnishing a lurid gleam of brightness to the dull aspect of the heavens. Within the bosom of the encircling hills, an impenetrable darkness had already settled; and the plain lay like a vast and deserted charnel-house, without omen or whisper to disturb the slumbers of its numerous and hapless tenants.

(from the last of the mohicans) 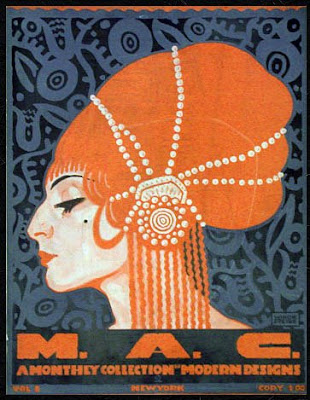 winold reiss's young heart was captivated, and he decided very early on that he would go to america to see the indians for himself, and to paint them.

and he did, but not before he developed a monumental career for himself in the arts. this cover which he did for a magazine which he helped found places him directly in the japonisme moment.

we see all of the familiar signs of the times as we have seen in the german posters we've looked at in the last few weeks, and at the american ones they inspired, and the japanese portraits of actors which had in turn inspired the germans.

the outlines, the bold patterns, the flatness and outlines, the blocks of color; the diagonal structure is not utilized, but had that moment of japonisme not happened, winold reiss would not have designed this cover the way he did. 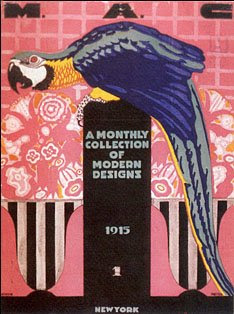 In common with many other German boys whose imagination had been stirred by Fennimore Cooper's novels, Mr. Reiss had a romantic interest in the North American aborigines. He wanted above all else to paint them. But his romantic imaginings were tempered by an artistic training which demanded accurate observation of character.

And so he decided to come to America in 1913 for the express purpose of studying the North American Indian in his native habitat and also to introduce modern decorative art, which, although a flourishing and accepted style in Munich and Vienna, where it had its origin, was practically unknown in the United States. The Crillon Restaurant, which Mr. Reiss decorated in 1920, was the first demonstration of the decorative possibilities of the new style. Since that time Mr. Reiss has been one of the outstanding pioneers in introducing a modern decor which should harmonize with American architecture and express American taste. 1 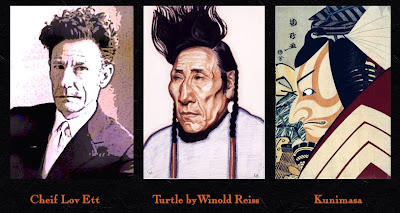 The career of Winold Reiss was congruent with the seeds of the Arts and Crafts and Applied Arts movements. Both employ bold lettering and simplified forms, large expanses of flat and contrasting colors, and strong lines: the distinctive attributes of the German Poster Style.

While the first M.A.C. cover was self-consciously sophisticated and represented a tour-de-force of the lithographic art, the tenth (ca. 1917) shows us another, quite different, side of his artistic personality, the love of primitive natural motifs and the ability to reduce and simplify them to essential patterns of form, line, and color. The bird and flower motif becomes a signature in much of Reiss's later work small design sketch whose strong lines, squarish grids, and punctuation of broad flat surfaces with simplified decorations recall the work of Josef Hoffmann and the Vienna Secession. 2

posted by lotusgreen at 1:01 PM

That Reiss Grand Canyon piece is a stunner.

isn't it amazing. it reminds me of the one by hiroshi yoshida. what further amazing is that not only have we seen so many versions here, and pretty much all of them featuring, out of the entire area, the same view, and yet still they manage to, well, amaze.

and also fortunately is how much wyeth is there.