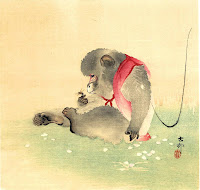 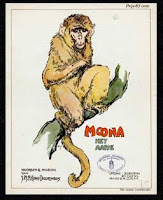 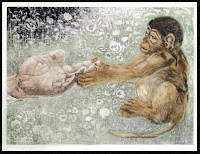 (i want to talk about something that has been really difficult for me to deal with for a number of months. there's this other person who from the day they started their blog has been 'borrowing' from my blog. at one point i counted, and they had lifted or duplicated over thirty images and their topics in about a four-month period.

when i finally said something, they never responded, but removed a few of the images, and pretty much stopped doing it. until this month when it has started again. i'm not saying that more than one person can be interested in similar things. i'm saying when the same images are used within a week or so over and over and over, it feels like a real invasion.

the last number of posts i'm not even sure that they are repeats of images, but i am so over-stressed about this person at this point that even the repeat coverage of a topic shortly after i have covered it feels like the same kind of theft.

online blogger friends have agreed that this is such bad blogging form, but i could really use some more support if you have got any. i find myself wondering who this person thinks that i am--some kind of wikipedia? no i'm a single retired woman who has been interested in this subject for like 35 years, have written about it many times, has amassed a broad library on the subject, and who spends many hours every day doing research, and then combining everything, and then making it look good on blogger.

please share any support, thoughts, ideas, or suggestions with me.

Labels: don't monkey with me

posted by lotusgreen at 4:51 PM

oh Lily I am so sorry to hear that. just a couple of days before a french blogging-friend shut down her blog for similar reasons, because her jewelry-creation had been constantly copied and stolen. but you have to keep going, please. they will soon get tired of it, I suppose. unless they have a secret reason to try to upset you?! I do hope everything will be ok soon and Lily will be smiling in the spring sun again.

you're such a dear. thank you. that's so sad about your friend. (i wonder if i know her.)

it doesn't look like they're getting tired of it, and if there is anything in your other suggestion, i would have to say it's something in their personality because we don't know each other, and have had no other contact.

first of all i love this POST - esp. its title: DON'T MONKEY WITH ME.

it truly IS in bad blogging form to continually take and take and take from you ..... i'm guilty for stealing images that i find on google (never would i go straight to someone's blog and lift!). And to some purists, my thievery is just as bad.

But this? this is bad karma, bad sensibility and a person with no boundaries or respect for others.

and, as a redhead and bona-fide rabble rouser, if you'd like to privately send me a 'link' .... i'd be more than pleased to leave a comment - not using your name, just suggesting that i had seen this material before on another blog and so, WHAT'S THE DEAL ???

hopefully, the more the word gets out, the more 'pressure' or 'shame' will get this blogger to clean up his/her blogging habits ..... unfortunately, if the private tactic did not work, then going public ......

that is a mighty tempting, and extraordinarily kind offer. thank you. i may take you up on that.

I agree with blue lady, but they could just delete the comment, couldn't they? maybe you should expose everything here, their link and so on, this would be enough public pressure perhaps? I think I would have already done it, you've been more than considerate in your post.

do what you feel is right in your heart .... but know this: I've got your back, girlfriend. And I have no compunction whatsoever for standing up for dear friends.

thank you both so much. i'll be thinking about all of this. in the meantime i feel like why should i post anything when it might just get ripped off.

now, rationally, nothing is getting ripped off. i don't own the images, generally, and they do not use my words.

Hi Lotusgreen! When we were kids we'd call such people "copy cats". As obnoxious and annoying as it may be, the old saying goes, "Imitation is the highest form of flattery." I'm sorry this has happened to you, and I would hate to think that we would be deprived of all of the really wonderful, posts on account of someone else's lack of originality. They might be able to copy and paste images, but to have such an exhaustive knowledge of the subjects you present, and the unique way that you cohesively stitch these elements together and present them is uniquely you, and no one could copy that, which I admire, appreciate and honor about you. As with any copy or fake, it doesn't distract from or lessen the value the original. Don't let them dishearten you. Infinite blessings!

In some ways, the idea theft is the worst - isn't that what each of our blogs is essentially all about?

You could make your blog private; I know some people who've had to do that. (And if you do that, I surely hope I receive an invitation - your blog is a jewel.)

I'd be in on going to this person's site and calling their attention, very politely, to the fact that they are stealing ideas. I don't believe in flaming or violence, but there's nothing wrong with calling attention to something that bothers me personally.

P.S. How did find out about the thievery?

i have alerts set up for certain words, certain artists' names.

this person does know my feelings about it anyway (and it occurs to me may be reading this)....

but thank you sweetie.

the words from y'all are honestly helping, along with my curiosity and passion which have been driving me thusfar here.

oops--going through my email backwards-- thanks quiche--your words ring clear to me.