don't tell any- one, but women used to have bottoms, breasts, and bellies. in fact, when they chose clothes to wear, or dictated what was fashionable, the styles might even exaggerate them. but then things changed. 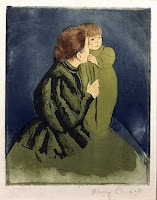 It was a difficult time for the former matrons of Edwardian society, the previous leaders of fashion whose style of dressing became as passé as their rounded figures and older faces. More youthful women who could party all night and carry the boyish fashions well were all the rage. 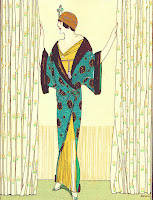 The slender flat- chested tanned body and face of a 15 year old became the desired silhouette of the bright young things of the 1920s. 1 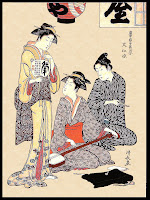 Women’s fashion in the early 1900s highlighted the silhouette of the mature, full-figured body. Low busts and curvy hips were flaunted by the dress styles of the era... From 1910 until the start of the First World War in 1914, fashion continued to move toward slimmer, narrower silhouettes that emphasized flat busts and slim hips . Bustles and trains were removed from dresses, as fashion designers played with the length of skirts to reveal enticing new areas of skin. 2

and of course, as we've seen, this is also the period during which the influence of japonisme on fashion became the most evident. women and fashion designers were suddenly looking at young idealized japanese courtesans with a new eye. but this new audience for the ukiyo-e may not have understood that they were seeing through the artists' eyes as well.

Suzuki Harunobu (1725-1770) was the first artist to use the technique of full color printing. He popularized a new aesthetic in female beauty—that of a delicate, ethereal, childlike woman... Torii Kiyonaga (1752-1815) focused on bijin-ga (pretty women). His women are stately and statuesque. They are more realistic than Harunobu's, but are still impossibly tall and elegant. His faces exhibit a high degree of idealism and are often indistinguishable from each other. 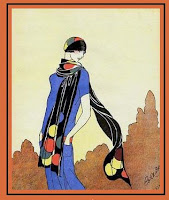 Kitagawa Utamaro (1750-1806): Utamaro worked mainly with bijin-ga, his prints dominating the Ukiyo-e scene in the 1790s. He took Kiyonaga's female type to its elegant extreme. His were tall, full-bodied women with large oval heads. Utamaro depicted these women on a monumental scale, often delighting in bringing the figure forward and focusing on enlarged heads and torsos. 3

so i begin to wonder, putting this all together in my head...: were we seeing, in the 20s, evidence of women's "new freedom," as the new look is often attributed to, or yet another sample of japonisme?

are we still punishing ourselves for having edwardian bodies in a "modern" world due to the fancies of japanese printmakers from over 200 years ago?

as we've seen, we were quick and happy to emulate the japanese clothing, and perhaps we were also inviting in their bodies as well. many of us in the west are from, or have ancestors from, european peasant stock, inheriting bodies as far from the stereotyped (let alone the idealized) japanese body as a body could be. in inviting in these body images, we were also welcoming decades of frustration and self-hatred.

posted by lotusgreen at 8:10 PM

What a unique and interesting blog; I've never seen anything else like it. You are obviously very artistic; thank you for the historical information in today's post, and all the interesting pictures that went with it. I will be back to peruse again.

thank you so much, lavinia--glad you found the place. i'm glad the info held together for you.

And there was definitely no place for the pregnant body...

hi lotus, I don't know what happened to the feeder...
I wanted to leave comments on these wonderful body-related posts, but I kept postponing it because I tried to find some quotes that I had in my notes regarding the japanese perception of our body at the beginning of the 20th century, Soseki and Tanizaki have some interesting thoughts about it. Unfortunately I could find only my Romanian translation of the English texts :-(
Anyway, if your hypothesis is true and our fashion was indeed influenced by our image of the japanese body as perceived through ukiyo-e, then it is very ironical that in the very same time the Japanese tried so hard to embrace our type of body. Even today they have a lot of complexes about their body, being a (white) foreigner makes one immediately beautiful in their eyes, women (and recently men also) use a lot of skin-whitening products, surgeries to get a double-fold eye are increasingly popular, there is a whole myth about the beauty of the "high" nose as opposed to the Japanese flat type and so on... not to mention the legs... one cannot avoid pondering about all this race-body-cultural construct-issue while being in Japan. interestingly enough, this westernization-fashion doesn't seem to have affected the breasts, japanese girls don't like big breasts, maybe because this is one body feature that frightens the ordinary japanese male.

i remember on a paris bus one day, looking into the face of a young woman, realizing that of course the people of paris appeared the most beautiful to me--this is the art i had grown up with; this culture defined beauty for my eyes.

so it would seem by that logic that the japonisme-exchange may have defined a new japanese beauty as well? god that's sad.

i suppose as long as women remain even to some degree economically dependent, and as long as so many of us are driven to reproduce with a perceived limited selection of men, we won't be self-defining. (a lot of the stuff i read during recent research pointed to scarcity of men as a driving force in times of more blatant sexual display.)

i'd love to see those notes when you come up with them.

what to do about plastic surgery-driven populations? grieve?