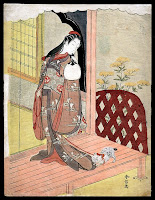 While nineteenth- century critics had reservations about artists' adopting Japanese conventions in paintings and prints, this was not true in the arena of fashion. French textile designers in the 1890s, for example, readily appropriated new and "exotic" floral motifs from Japan, and these fabrics were readily used by couturiers like Charles Frederick Worth.

The most popular item of dress exported to the West in the late nineteenth century was a modified version of the kimono, worn as a dressing gown. Both fully finished garments and unsewn components were sold at small boutiques and at large firms such as Liberty of London. Kimonos for export were often constructed with elements to suit the European market; these might include a set-in box pleat to accommodate the bustle; a collar lining instead of an under kimono; the addition of a knotted and tasseled trim; and a variety of sleeve styles.

In the decade prior to World War I, the construction of women's garments began to change dramatically. As early as 1908, revolutionary couturiers, such as Marie Callot Gerber and Paul Poiret, took inspiration from the drapery-like quality of kimonos. Loosely cut sleeves and crossed bodices were incorporated into evening dresses, while opera coats swathed the body like batwinged cocoons. 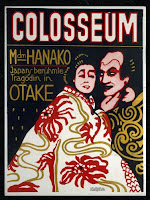 One of the twentieth century's greatest couturiers, Madeleine Vionnet, was inspired by the kimono with its reliance on uncut lengths of fabric, and raised dressmaking to an art form. From the onset of World War I to the late 1920s, she abandoned the traditional practice of tailoring body-fitted fashions from numerous, complex pattern pieces, and minimized the cutting of fabric.

A "minimalist" with strict aesthetic principles who rarely employed patterned fabrics or embroidery, Vionnet relied instead on surface ornamentation through manipulation of the fabric itself. For example, the wavy parallel folds of a pin-tucked crepe dress evoked the abstracted image of a raked Zen rock garden, itself a metaphor for the waves of the sea.

Although the influence of the kimono on the construction of garments was extremely important in the 1910s and 1920s, surface ornamentation remained a vital force. During the art moderne, or art deco, era, French textiles in the Japanese style developed a more sophisticated use of both abstract motifs and recognizable images. 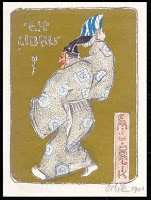 Examples range from metallic lamé dresses that replicate the appearance of black lacquer inlaid with gold particles, to garments of brocaded silk woven with a pattern of crashing waves and fish scales. Also appropriated was the mon, or family crest. While the mon is usually an abstracted image drawn from nature, such as a bird or flower, it can also represent a man-made object, such as the nara bi-ya, or parallel rows of arrows; or celestial bodies such as the mitsuboshi, an abstraction symbolizing the three stars of Orion's belt.

from Japonisme, by Patricia Mears. Encyclopedia of Clothing and Fashion. Ed. Valerie Steele

(what interests me is seeing the interpretations of the japanese designs by the western artists. i generally like them better than the original japanese or the western style either.)

posted by lotusgreen at 6:32 PM