i know there will always be war because there has always been war.

War is Peace
Freedom is Slavery
Ignorance is Strength* 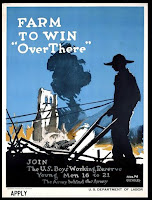 i know that wars will never be about what we are told they are. 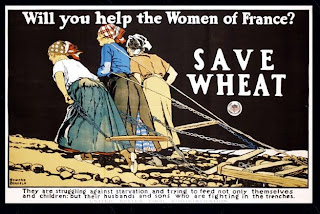 Attention! Your attention, please! A newsflash has this moment arrived from the Malabar front. Our forces in South India have won a glorious victory. I am authorized to say that the action we are now reporting may well bring the war within measurable distance of its end.*

i know that lies will be told to me to enlist my support. the way to a woman's heart is through her kitchen.

i know every nations mothers and fathers feel the same about their children, so protecting the children becomes the reason for war.

The war, therefore, if we judge it by the standards of previous wars, is merely an imposture. It is like the battles between certain ruminant animals whose horns are set at such an angle that they are incapable of hurting one another. But though it is unreal it is not meaningless. It eats up the surplus of consumable goods, and it helps to preserve the special mental atmosphere that a hierarchical society needs. War, it will be seen, is now a purely internal affair. In the past, the ruling groups of all countries, although they might recognize their common interest and therefore limit the destructiveness of war, did fight against one another, and the victor always plundered the vanquished. In our own day they are not fighting against one another at all. The war is waged by each ruling group against its own subjects, and the object of the war is not to make or prevent conquests of territory, but to keep the structure of society intact. The very word 'war', therefore, has become misleading. It would probably be accurate to say that by becoming continuous war has ceased to exist. The peculiar pressure that it exerted on human beings between the Neolithic Age and the early twentieth century has disappeared and been replaced by something quite different. The effect would be much the same if the three super-states, instead of fighting one another, should agree to live in perpetual peace, each inviolate within its own boundaries. For in that case each would still be a self-contained universe, freed for ever from the sobering influence of external danger. A peace that was truly permanent would be the same as a permanent war. This -- although the vast majority of Party members understand it only in a shallower sense -- is the inner meaning of the Party slogan: WAR IS PEACE.*

and i just know that there is not a single person, a single sentient being, who doesn't cherish safety, and know no one is safe during a war.

posted by lotusgreen at 3:46 PM

patriotism is a strange mindset ... it seems to take us over - a group hypnosis. i think peer pressure has something to do with it.

i remember i had just moved back to the states from guatemala when 9/11 occurred. yes, it was horrific and surreal to watch (too many movies). But i had also just left a place where 3 gunned men in the middle of the afternoon at the busiest street intersection car-jacked our car demanding to know where my youngest son was ... a time of unlawfulness had begun in the country ...

sorry. i digressed. so it seemed that all of a sudden every car in our new suburban community was driving around with small flags waving from windows ... yes, we eventually got one too. Truthfully, however, i wasn't sure exactly what i was feeling patriotic about. death, destruction just seems to be so random to me.

i can remember seeing my grandmother's and great-grandmother's food ration coupon books. i heard stories of how they received the fake butter (lard) and then a packet of powdered yellow food coloring to mix into it = margarine. And yes, they planted victory gardens. Brothers went to war. Neighbors, boyfriends too. Not all returned.

i ask myself is there any ideal i would be willing to die for? my children's lives, yes. i'd like to think i would have stood up to the Nazi's against the genocide of the Jews. Yet genocide is being perpetrated all over the world. And i'm sitting rather cozy here in my own little world of woes ....

thanks, blue. yeah--it seems the word patriotism has altered meaning in the minds of some: from "i love my country" to adding "and hate yours." must be human nature, though, cause everyone is doing it.

i was never much of an historian until i started this blog, but now i find myself wondering about all the wars. was unspeakable genocide really why we entered WWIII? And why did we really enter WWI?

there'd be a lot of books (and websites) i'd have to read in order to begin to come to an understanding of the answers to those questions, and you know what? i already know that i'd learn we'd been lied to, so why read them?

i believe that unfortunately you are right, lotus. wars are never so 'hallowed' as they are spinned to us. And the discomfort is knowing that we all have been collectively lied to ...

i don't understand it. war seems to be about tapping into our agressions, our brutality - sidestepping rational and humane thought or actions ...

and the thing is those aggressions are there--in each of us--and is playing out every day in our lives--well, in mine, anyway.

and in mine as well ....i've always believed that I have to acknowledge my own 'dark side' as much as i try to live in light and love ...

we humans are a strange race.

ever seen house finches at the feeder?

You have compiled a display of exquisite images--a moveable feast for the eyes. I discovered your blog while searching for the Carl Moser woodblock print of a peacock with cherries that I am fortunate to own. I always knew it was special and now I know why. Thanks for sharing with us your passion for Japonisme.

well thank you, and welcome! how lovely for you to have that carl moser -- the colors are so wonderful.