during this same period, quickly approaching the last midnight of the edo era, while france was growing ever more "refined," and "classical," some very different things were happening in england, and, not unrelated, i don't think, in japan as well.

i didn't have any idea when i began this series that it would end with such elegance, such synchronicity, and probably to say 'end' is wrong anyway.

"When I am asked, 'Who was the greatest artist of all?', I reply that I can never quite decide whether to pick Turner or Hokusai. These two men were near contemporaries: born in 1760, Hokusai was 15 years older than Turner and died in 1849, just two years before him. Both men were hard at it as full-time pupils flora about seven and devoted themselves entirely to art for the whole of their long lives. Their output was prodigious: Hokusai finished more than 30,000 drawings plus more than 500 illustrated books. Turner's drawings and watercolours number more than 20,000, in addition to 900 oil paintings, many of them very large. 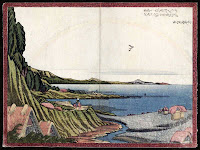 "Both started as urchins in huge cities, London and Edo (Tokyo), but expanded their universe to take in the whole of nature. This process of observing and recording was never-ceasing. Turner was trying to find new ways to paint mist, vapour, water eddies and wind-flung distances in his late seventies. Hokusai wrote at the age of 74, 'I produced nothing of much value before I was 70. But I am now really beginning to learn. By the time I am 110, each individual dot or line I draw will possess its own life.'" * 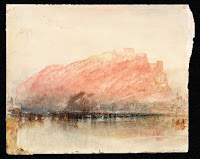 but there are wondrous other coincidences. take for example turner. now, remember john cozens, son of andrew? well, john was ill, and he began to see a doctor named dr. monro. monro was a great fan of cozens' paintings, and was an amateur painter himself. he soon had collected a great collection of the work of the younger cozens. 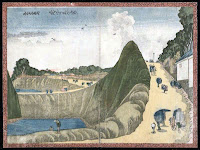 now we have already suggested, quite convincingly, i believe, that cozens the elder had gotten his hands on some of the japanese work arriving into the netherlands; dutch painting was popular in britian at that time, and we know the dutch also had japanese scrolls. it is not a far leap to assume that john had seen them as well.

dr. munro also took art students, occasionally. when he did, a major practice he'd lead them through was to copy, over and over, the cozens paintings. one of his two leading students you may not have heard of -- his name was thomas girtin. but the other, his friend and schoolmate you have. it was jmw turner. 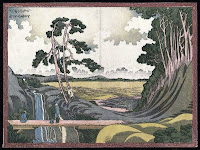 about 6000 miles to the west, the imported artwork from holland was having a major impact. shiba kokan was a japanese painter who had gotten ahold of a dutch book on 'how to draw.' being one to tend to the rational, even scientific, he was quickly convinced that european painting was superior to that in japan and quickly sought to learn all he could. he could not read the dutch, but he could grasp the principals, such as perspective and modeling, from the book's illustrations. 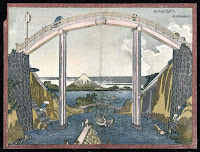 "Many of the masters of ukiyo-e showed their enthusiasm for this Europeanizing trend, including the young Katsushika Hokusai, a student in Shiba Kokan's workshop."1 hokusai completed a series of "prints in the western style" just as the century turned to the 19th; with framing, perspective, and some shading/shaping, hokusai was helping to usher in the changes that would immediately follow his death.

two men, half-a-world apart, on such similar paths, as though meeting each other in spirit just before their cultures met again in the world.

in the hokusai prints it is easy to see, once one is told, how much he has borrowed from the western styles, becoming organized, scientific, and sound. just as turner abandoning himself to the moment, losing everything, losing perspective, losing even shading, and in losing these, gaining finally his freedom to paint.

posted by lotusgreen at 3:10 PM

Well! What a satisfying collision of seemingly contrary views. It makes me even sadder that Ruskin destroyed all Turner's brothel drawings, which would have made a fascinating comparison with Japanese ukiyo-e.

Hi Lotus,
I love this idea of a "last midnight" of an era. -Very poetic. and another highly literate post by you.

thanks princess. looking forward to seeing your magic mum.

It's interesting reading a complex and innovative thread on a blog, such as this groundbreaking one, that the experience is quite hard to quantify, at least for a book person. I feel I want to have the text and the pictures in my hand. There's so much in these posts. And for anyone coming across the blog today, they are going to start from the end, and work their way back to the beginning...

oh dear! heh. well, i couldn't have written it backwards cause i wouldn't have known where i was going!

i just hope everyone knows by now that you can see the image bigger by clicking on it. beyond that, i'm just guessing, or supposing. i think the thing the research does for me is to slightly re-align my reactions to what i see. you too?

neil! i have never heard of these. i thought ruskin championed turner while pinioning whistler when he did remarkably similar things....?

John Ruskin was an avid fan and champion of Turner. However, after Turners death, Ruskin was more than happy to doctor Turner and his work.
References to sex had always made Ruskin uncomfortable, so if he was in the process of engineering Turners work and lifestyle, leaving any references to a brothel out of the process was probably doing Turner a service, as he saw it.

How many artists complete works have we been denied by relatives and friends engineering their career after death?

not to mention governments. i feel alternately protective and grief-stricken as i read about life after life, life's work after life's work, shattered, often for some politico's need for power at the expense of eros.

before i started all of this, i really had no idea how ubiquitous it was, as though the cost of creation was always, in the end, madness or punishment. or, of course, both.

so when ruskin did this, was it before or after he had succombed to madness himself?

Long before. In his defence, he did honestly believe that he was protecting the reputation of Turner. He undoubtedly thought that Turner was too great an artist to have his reputation sullied with titilating smut, as he saw it.

The Victorians definitely liked to keep sex on a seperate shelf from the rest of life.

Having said that, I do greatly admire Ruskin and his work. He was a great locomotive of a man, with a passion for fine and decorative art and a champion of not only Turner, but the Pre-Raphaelites, William Morris and many others who would have struggled if not for his critical support.

yeah, i know. still, for what he did to whistler i feel unforgiving. and despite whether or not i actually believe in his pre-raphaelite philosophy, i do like much of the work, and of course his pioneering spirit which led to morris et all i greatly appreciate.

I agree with John (and thanks for making a bridge of introduction between us, Lily) that Ruskin is a towering figure in art history, and social thought. Without him, Turner would never have been understood at the time it was critical he should be understood. To blame Ruskin for his inadequacies - unable to move a step forward and appreciate Whistler, crippled with sexual inhibition and inadequacy - is to miss the point of his piercing and original intellect. So far as Turner's erotica is concerned, I believe most it to have been destroyed by Ruskin or with his collusion. I think a few surviving examples were included in an erotica exhibition at the Barbican last year (?), but I didn't attend it, don't have the catalogue, and can't remember what the exhibition was called. The Tate Gallery has a few (rather murky) erotic colour sketches. Someone who knows more about Turner than me can probably help!

okay okay i'll actually READ some of the ruskin i have lying around. (i only buy them for the pictures.)