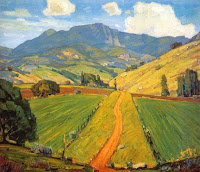 peas in a pod who likely never met. 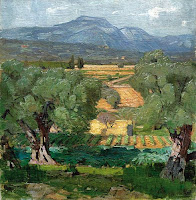 carl moll and william wendt were born not that far apart (but far enough to assume they never met). 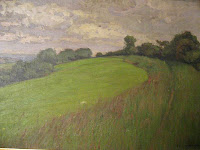 carl moved to vienna and william to the united states. they both painted. 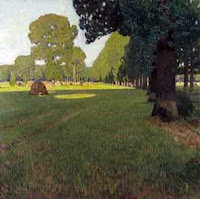 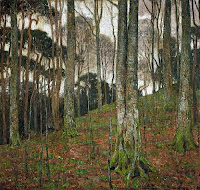 thus, these impressionists were second generation, and the differences show. 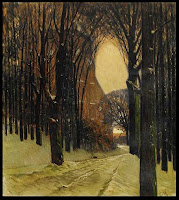 both have incorporated the flatness and suggestion of outline that the spread of japonisme had predicted, along with its asymmetrical design and frequent forward-weighted balance. 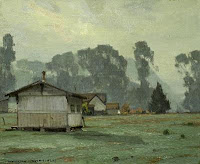 brush strokes were often blunt for both.

they love similar colors, and the mountains, and the last moments of the perfect earth.

perhaps the fact that both chose the relatively unusual square format, suggests that both believed boxing the past might preserve it. 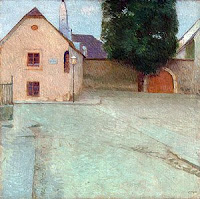 william wendt moved to the golden state and painted it with deep reverence for the rest of his life. he helped to found the california art club. 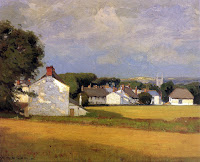 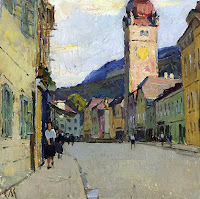 the tide of the movement lifted all boats; where one was moored was inconsequential.

teachers impart vision to students who sow it like seed across the land. 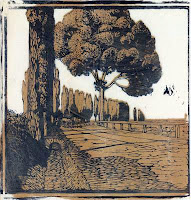 posted by lotusgreen at 5:51 PM

Love the term ' growing a painting ' such a truism.

Wonderful landscapes. Makes me want to paint one ;)

Interesting twin spirits; born of the same palette. And only you to recognize that so long after.

dominic! i couldn't imagine a better outcome. i hope i get to see it when you do.

born of the same palette.... nicely put, princess. brothers of the palette

Hello my dear (my english is poor excuseme) I´m painter and my works is oil on canvas. I want to give many thanks for you words. Your blog is really wonder.

have a nice day

no apology is necessary. i hope anyone who reads this visits your blog too to see your beautiful work.

These are so lovely. Thank you for introducing me to these two artists.

oh, thank you, sam. welcome! and it's wonderful to share favorites and have them received well.