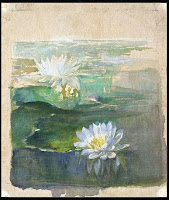 John La Farge was a self-taught man, and had no technique at his command, but he had one quality which American art until then had rarely known, namely, colour. This rare gift became first noticeable in his flower pieces, which occupied him during the years 1860-65. His water-lilies are a revela- tion of colour. The water seems to take a green reflection from the flower-sepals, broken lights from the white blow vibrate all through it, and the sensitive gold of the stamens at the heart of the lily shines through the white petals quivering in the sun. 1 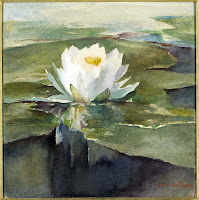 Married to the grandniece of Commodore Matthew Perry, who opened Japan to the West in 1853-­54, La Farge began collecting Japanese decorative and religious arts in 1856. Almost contemporaneously, he began painting flower still lifes, progressing to watercolors of water lilies, a common Japanese landscape theme, which evokes the sacred Buddhist emblem of the lotus. 2 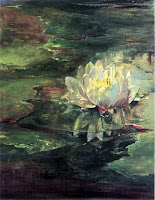 In 1886 La Farge traveled to Japan with his friend Henry Adams, where he studied Japanese landscape painting, Buddhism, and Taoism. While there he was taught by Ernest Fenollosa, William Sturgis Bigelow, and Okakura Kakuzo, all of whom had been initiated into Tendai Buddhism. La Farge was strongly attracted to Taoism, identifying with the Taoist and Buddhist absorption into nature.

He saw this as a way, "to live again in the oneness of mind and feeling which is to open to us the doors of the kingdom." If he found in Taoism the theoretical foundation to explain his artistic participation in nature, in Buddhism he discovered direct imagistic inspiration. "The radiance of the landscape illuminates my room; the landscape does not come within. I have become as a blank to be filled." 3

"It was a delight in me, in this mood of veneration for past greatness, to recognize in the veilings and sequences of this paint- ing of the lotus methods I had used my- self, working at such distance of time and place, when I had tried to render the tones and the transparency of our fairy water-lily." (from a letter written by La Farge)

"La Farge is like a spectacled and animated prism. He has taught me to feel the subtleness and endless variety of charm in the color and light of every hour in the day and night. I get gently intoxicated on the soft violets and strong blues, the masses of purple and the broad bands of orange and green in the sunsets, as I used to griser myself on absinthe on the summer evenings in the Palais Royal before dining at Vefour's, thirty years ago. The outlines of the great mountains, their reddish purple glow, the infinite variety of greens and the perfectly intemperate shifting blues of the ocean, are a new world to me." (from a letter written by Adams)

posted by lotusgreen at 7:15 PM

marvelous lotuses! and this, oh, how true:
"The radiance of the landscape illuminates my room; the landscape does not come within. I have become as a blank to be filled."

i was just thinking about these yesterday..psychic link!

rox! you always have an eye for the sweetest line.

Those watercolors by La Farge are some of the most beautiful pieces that you've ever posted. Simply stunning! I was completely ignorant of him and now, as so often with your blog, you've given me somebody new to understand and appreciate.

namaste, nancy. i am thrilled that this post could give something to you, just as you have just now made me quite happy.

thank you lucinda. you never know what will touch other people....