japonisme: the panama-pacific, that is! • part 4

the panama-pacific, that is! • part 4 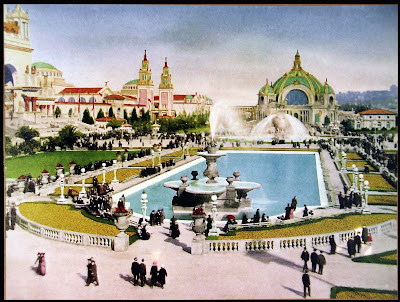 just gaze for a moment at this spot which really existed for a few short months, about a hundred years ago, as its city still reeled from its earthquake and fire, and while the rest of the world warred on.

can you imagine? wonderland indeed.

you've come to see the murals and the french painters, and now see the statues. there are more statues at this fair than you can look at in a week and a half, and that is just the beginning.

you can see the bathing beauties,

then fifteen minutes later you can go listen to john philip sousa and his band play a march.

you can visit, with- out leaving the fair, yellowstone, the grand canyon, or even mt fuji.

perhaps you're curious about panama itself -- well then visit there -- or maybe china, or samoa, or, other nations far and near. 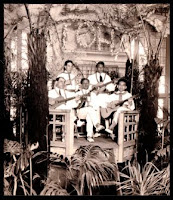 or maybe, after visiting the national parks, and then japan, you decide to visit hawaii, as you've just heard hawiian music for the first time and you couldn't keep your those hips from swingin' to one of the many new songs introduced at the fair (even irving berlin had one) that then went on to make it big all over the world. 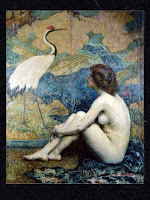 but the palace of fine arts keeps drawing you; you see some japonisme, 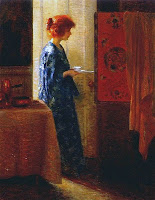 but maybe less than you had expected, given what you'd seen in europe just one year ago. 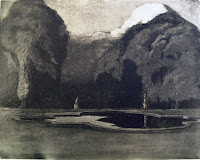 you love being introduced to tonalism and now that you have spent more than a week in san francisco with it's cover of fog all day, even in the summertime!, you understand why the tonalists use such muted colors. 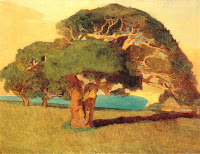 and since you loved her husband's mural, you are thrilled to learn his wife's a painter too.

lots of etchings are exhibited, but nothing like the won- drous work from nabis or any of the other new-century art trends that you'd seen overseas.

and what they did show was usually without color and sometimes even appeared to have travelled back in time while the rest of the world moved forward. were the american judges classically trained and old-fashioned?

why were so few of the prints and paintings so far less colorful and free as the murals. certainly not that guerin guy. 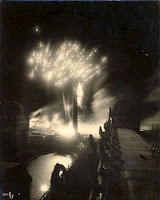 and yet, is there any way to say that this has not been a dream with sincere magic? has not your heart been lifted and your mind eased and entertained? 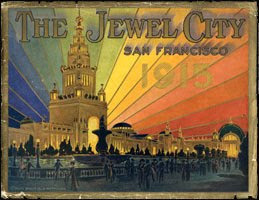 and in the end you are grateful, very grateful, for all the colors
of the jewel city.

(tomorrow more references than you can shake a stick at)

posted by lotusgreen at 5:50 PM

Wow! Very different world. 1915. The world is at war, but America hasn't been drawn into it yet. You know who the "bad guys" are, & they're over there. Artists could find salons & hang out with writers, musicians, models, actresses, fellow artists & possibly a spy or two. You could get high from the cocaine in your hair care products & Coke was, indeed, the real thing. Artists back then were looked down upon (because of their "Bohemian" lifestyles, & because, back then, models/actresses were a very small step above prostitutes) & revered both at the same time (because they're artists). These days, unless you've achieved fame, as an artist you're still looked down upon, because you aren't in a "real job" & if you are, fellow artist tend to see you as a hobbyist.

evan! i don't think i would have ever thought of that! thank you for such and amusing and ironic response!