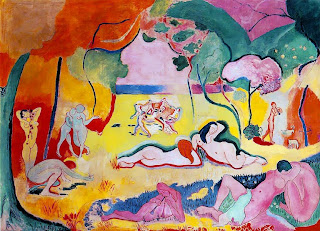 schjeldahl's way with a word every bit equals matisse's with a brush. one ogles, awed. as i amble through his 2005 review of hilary spurling's “Matisse the Master: The Conquest of Colour 1909-1954” in the new yorker, maybe you'll agree.

"[His] art, whose glory was maintained and renewed in many phases until the artist’s death, in 1954: preternatural color, yielding line, boldness and subtlety, incessant surprise. Anyone who doesn’t love it must have a low opinion of joy. "

"this book completes the job of giving us a living individual, as familiar as someone we have long known, who regularly touched the spiritual core of Western modernity with a paintbrush.... I don’t think it is possible to be more intelligent in any pursuit, or more serious and original, and with such suddenness, than Matisse was when he represented a reaching arm in “Dance I” (1909), or the goldfish that he painted as slivers of redness in a series of still-lifes in 1912. How can intellectual potency be claimed for an artist whose specialty, by his own declared ambition, was easeful visual bliss?"

"His immense notoriety, which had been confirmed in 1905-06 by “Le Bonheur de Vivre,” a fractured fantasia that seemed to trash every possible norm of pictorial order and painterly finesse, was regularly exciting near-riots of derision in the public. (“My Arcadia,” Matisse called the picture, which established his career’s dizzying keynote: calm intensity or, perhaps, intense calm.) His huge-hipped, sinuous “Blue Nude,” of 1907, discomfited even Picasso, who complained, “If he wants to make a woman, let him make a woman. If he wants to make a design, let him make a design. This is between the two.” 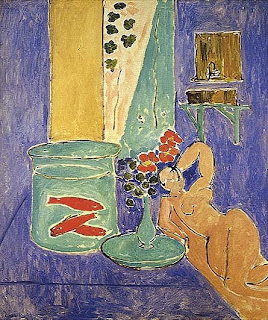 "Matisse told his students, One must always search for the desire of the line, where it wishes to enter, where to die away.... Colors enter the world through Matisse like harmonies through Mozart. Gertrude Stein (unlike her sister-in-law Sarah Stein, Matisse’s first major collector) enjoyed ridiculing him, reporting with satisfaction, Spurling says, that her French cook served M. Matisse fried eggs for dinner instead of an omelette because, as a Frenchman, he would understand that it showed less respect." 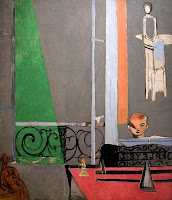 "[Matisse] shielded his art from politics under all circumstances—he created the reverberant domestic idyll “The Piano Lesson” (my favorite twentieth-century painting) in the summer of 1916, while death swaggered at Verdun. But there seems to be no gainsaying his at least passive solidarity with the Resistance." 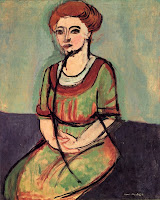 "Among Matisse’s students was Olga Meerson, a Russian Jew who had studied with Wassily Kandinsky in Munich and, already possessed of an elegant style,... Spurling writes, She personified the pride, courage and resilience that he responded to all his life at the deepest instinctual level in his female models. She also epitomized a period type of 'self-reliant single girl,' an obsessive subject for Matisse in those years, which Spurling locates between the earlier heroines of Henry James and the later solitaries of Jean Rhys. Matisse’s 1911 portrait of Meerson shows a primly dressed and posed, tremblingly sensitive woman slashed with two fierce black arcs—plunging from neck to thigh, and from armpit to buttock,” which resist any explanation aside from their sheerly formal éclat." 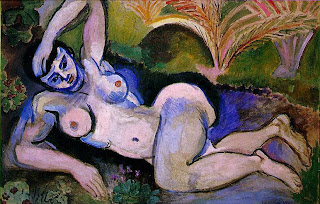 "The Nice odalisques, who loll on chairs or chaises amid flowers, fruits, and sumptuous fabrics. Indubitably erotic, the pictures diffuse arousal. Their sensuality never fixates on a breast or a thigh but dilates to every square inch of canvas. Such is the character of Matisse’s formal radicalism, early and late: distributed energy, suspended gesture, deferred climax. Might the tension have been so precious to him, as the engine of what gave his life meaning, that its only end could be exhaustion? It may count that, according to Matisse, he never ate even the fresh food that he used for still-lifes—including oysters, from a restaurant in Nice, that were returned in time for the lunch crowd." I 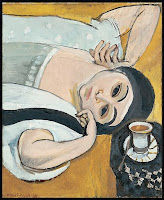 both evan in his comments and thomas in his discussion of brunellleschi suggest various bits of evidence of the japanese influence's journey taking the next steps to modernism -- saying more and more with less and less. cubism (a name allegedly coined by matisse), art deco, bauhaus: simplify, simplify, simplify. in matisse's work we see his plunge into shape, and color, and even abstraction.

don't miss his lovely green triangles across from each other above.

posted by lotusgreen at 5:07 PM

Matisse is one of my favorites from the early 20th century modern. His expressive handling of 2D arrangements is inspiring, edifying.

This was a very enjoyable read, and yes! I caught the green triangles, mirroring each other. Thanks to you. I hadn't noticed them together like that before.

i had gone off to find the paintings referred to in the review and started playing with them for layout when i noticed them -- otherwise i don't think i would have.

now i'm wondering if it lurks in others of his works.

i once had a poster of one of his paintings and i was compelled to stare at it endlessly to try to divine whether is was the colors of dawn or dusk.

I was looking at "The Piano Lesson" & was wondering- anyone else look at that & see Hockney? For some reason it reminds me of David Hockney's earlier work. I love the pieces you've chosen, the colors, the rhythm & all that jazz.

(ty for the mention. This is the first blog I visit in my daily visit to favorite art blogs- I always seem to come away with something, whether I've commented or not :))

you know, i just don't know hockney well enough; i should check it out! most of the pieces here were the specific ones mentioned in the article. but i spent the day going through my various matisse books, and i'd say one could hardly make a bad choice.

and thank you evan