japonisme: Where am I standing, if I'm to stand still now?

Where am I standing, if I'm to stand still now? 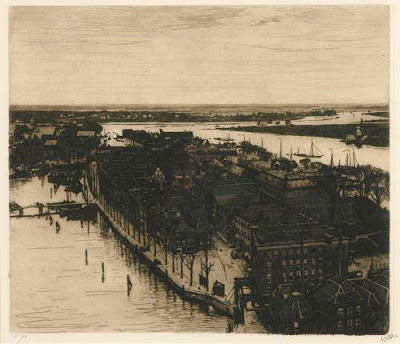 in hazy night
stepping into water...
losing my way 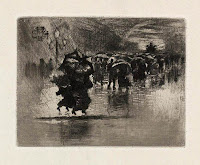 The season word in this haiku, oboro, refers succinctly to a hazy night of spring. In this uncertain, dreamlike light, Issa steps off a path into water. Hiroshi Kobori notes that the poet's state of mind is like the misty night. He feels insecure and bewildered, aware of the uncertainty of his own future. 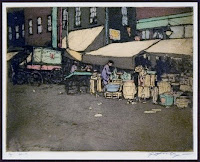 According to Lewis Mackenzie, this haiku alludes to the death of one of Issa's friends, a Buddhist priest. On a journey, Issa went to visit him only to find that he had been dead for several years. Mackenzie translates the last phrase, "Ways of delusion!" See The Autumn Wind: A Selection from the Poems of Issa (London: John Murray, 1957; rpt. Tokyo: Kodansha International, 1984), 30.

In Saigoku kikô ("Western Provinces Travel Diary") there is an explanatory prescript of which Shinji Ogawa offers this paraphrase: After hearing of his priest friend Sarai's death, Issa begged his replacement for a night's stay at the temple but was refused. Counting on Sarai, he had come over 300 ri (732 miles), "without a soul to lean on, going over the fields and the yards..." See Issa zenshû (Nagano: Shinano Mainichi Shimbunsha, 1976-79) 5.36. 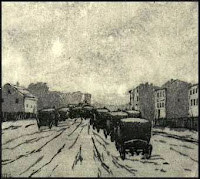 Makoto Ueda reports that Issa found a place to stay that night "just one hundred feet away"; Dew on the Grass: The Life and Poetry of Kobayashi Issa (Leiden/Boston: Brill, 2004) 33. 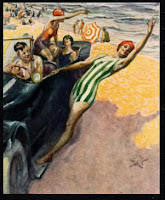 Debi Bender likes the repetition and alliteration in the opening phrase (oboro-oboro). To preserve this subtle music, she suggests this translation: 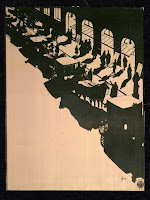 Dreamed the thong of my sandal broke.
Nothing to hold it to my foot.
How shall I walk?
Barefoot?
The sharp stones, the dirt. I would
hobble.
And–

posted by lotusgreen at 8:39 PM

These are so beautiful and evocative; like looking at something that brushes past the corner of your eye. You are left with a feeling of exquisite melancholy, knowing that you've missed something but not quite what it is.

Am I making sense?

you are an amazingly perceptive consumer of the arts, nancy. most of the time, my choice of words and image combine to convey something i felt i needed to communicate. and i always wonder, does anybody get that? well, you did.

love the art in your blog.
Do you know the names of the artists from pictures 2,4,5,6 from the top?
Especielly no. 4 I love so much.

All the best from germany
Clara

hi clara-- actually, i'm lotusgreen, but you can call me lily. to find out the artist, just click on the picture, and look at the title on the top of the window. if there is only a partial name and you want to know more, you can find the name in the list of labels at the bottom of the post. if you click on the name there you will be taken to all the times that artist appears in this blog!