japonisme: no faces of eve

no faces of eve 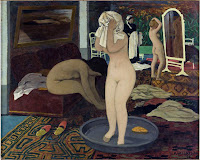 What great evil has man committed that he deserves this terrifying partner called woman? It seems to me that with such violently contradictory thoughts and so clearly opposed impulses, the only possible relationship between the sexes is that of victor and vanquished. *

Is it fair to understand Felix Vallotton through his artwork? Through his written words? Is it fair to feel one understands a man through his history as told through facts? Through the opinions of his contemporaries? Each is probably just as fair as when we, in all our inescapable subjectivity, judge one of our fellows. All I can say is that, from what I've read, quite a number of his interpreters and critics, and there are many that agree with my conclusions, and many that are wrong.

I'd like to just say... though... or shall I say, "state the obvious" -- These women have no faces! Not only that, but their colors are often practically inhuman, unhealthy, surely, and they look more like moulded plastic than flesh and blood, polished like fine wood, and constructed with all the right angles in all the right places. If touched, these bodies, even sitting by a fire, would be cold. 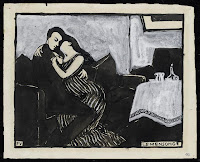 Consider, if you will, the very numerous images of "intimate" scenes. Here too, women consistently have no faces. As with the nudes, we seem to be peering closely, and yet cannot avoid a feeling of distance. Whose distance is really being registered? Is Vallotton commenting on the falseness of the apparent closeness depicted, demonstrating his despair at this "truth," or is the distance with the heart of the artist, leaving Vallotton himself the one with the inability to close the deal?

Many analyses of his work seem to take misogyny for granted: "the men were frightened by woman's new-found freedoms...." There have been those of his critics, both in his day and now, who will interpret Vallotton's work either as a brilliant and unsentimental exploration of the duplicities and failures inherent in marriage, or as evidence of his fear thus hatred of women. Should we excuse misogyny as temporal? Tell me when it started and when it stopped. 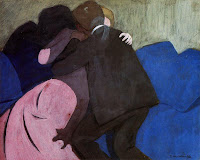 A smooth brow. A pale eye, well placed, but without brilliance under sickly eyelids, a short aquiline nose, a prominent upper lip where the beginnings of a retiring moustache could be detected, a thick-lipped mouth purposefully half-opened over quite beautiful teeth, but separated, and then, suddenly, the failure of everything in the weak little chin, a haphazard little chin which blemished the ensemble and spoiled it with its weakness. *

(He could almost be narrating his own artwork.)

The facts of Vallotton's own sentimental life are also ambiguous: was he a simple loving man dissolved by life's necessities, or a callous, selfish charlatan, motivated only by his need for fame? For ten years, Vallotton lived in the Latin Quarter with Helene Chatenay, a working-class woman whom he painted often, and cherished dearly, grateful for her generous emotional support.

At that ten-year mark, Vallotton leaves her, and marries a wealthy widow, Gabrielle Rodrigues-Henriques, with associates in the world of gallery owners and patrons of the arts. Has he thereby confirmed his own worse suspicions on the nature of love, or merely followed the instructions of his heart? He is quoted as saying words to the effect that, Helene knew I had plans to go off and marry some day.... He is reported to have been dispirited since the day he left her behind choosing, apparently, love over money. However he is also reported to have been, from the time of the wedding, happier than he had ever been in his life.

* The two excerpts in italics are from Vallotton's posthumously-published novel, "La Vie Meurtriere." It is about a painter with many biological details that match Vallotton's, who murders his working-class lover with a distant though passionate blood-lust. These deaths, which are supposedly accidents, fascinate him as participant, as observer, and as narrator.

How I miss my simple stupid days when I thought, when I looked at Vallotton's work, that I was seeing Eros, without catching a whiff of the
Thanatos lurking so closely by.

posted by lotusgreen at 2:23 PM

As always, your posts act as spring boards to something/somewhere else for me. Faceless women- Eros vs Thanatos. Like all young men, I had/have all manner of erotic dreams, & most of those dreams were with girls who's faces I couldn't recognize or remember, so I always thought of them as faceless- & as they were dreams, that wasn't terribly alarming. I found their facelessness made them symbolic girls, or psychic stand-ins- non specificity meant that in both dreams & the waking world, the realm of possibilities was wide open...I sometimes wonder if when we look at art, we over-think things. Perhaps a painting that includes a woman with no face has no deeper meaning than the artist chose not to make her a specific person, but to let her stand for Every Woman who has ever bathed, or dreamt of bathing in the sea, or Every Girl who stood at the threshold with a man & a decision to make.

that makes sense, evan, and it's very interesting. however.... the novel does exist. i generally agree with you, and hate these artsy analyses, which is in part why i wanted to include some of what all the various commentors in one book had to say, and how much they disagreed. but....

in his own words, vallotton does appear terrified, and states that in the vanquished and victor construction of intimate relationships, woemn were always the victor.

Absolutely fascinating - I had no idea about Vallotton's life or even much about his works. Thanks (as always) for information, enlightenment and intriguing questions. As for analysis - I usually for or the "men are a&%^^"but I know that's the easy way out. If I knew about about Vallotton, I would set up a time line and see if that could be checked against external events or even other cycles in his life. Unfortunately, he wasn't the only male of that period to have an almost pathological fear of women. I am trying to think of the name of the book which wrote about the Symbolists and their followers and those influenced by them and their complex emotions around women. But doesn't the best work almost always have both Eros and Thanatos? Otherwise, it's just wallpaper, pretty but meaningless. ?

I think it's interesting that some of the artists who made the most sensual images of women also (according to various sources) harbored serious anxiety about them. Klimt, one of my all time favorite artists, known for his womaniziing, was also alarmed by certain aspects of female sexuality...

...what in Vallotton's time was high anxiety, is now in our time (comedic & generally) accepted truth- Women are always right.

i think you might be thinking of Idols of Perversity? I talked about it a little HERE. and yes, this all made me think of that book too. I even got it down from the shelf to see if there was anything in it about FV but there wasn't.

so interesting, your last comment, nancy. shiva, and vishnu, eh? I think i just like straight vishnu, straight eros. that's my illusion.

heh, evaN. WOULD THAT IT WERE TRUE. oops