japonisme: desire, the body, and the gaze

desire, the body, and the gaze 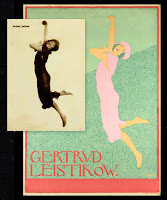 "In the years immediately after World War I, several impulses within the German modern dance movement attempted to present the nude body
as a sign of a modern, liberated identity “in the age of mechanical reproduction." Congruent with the appearance of the Nackttanz, or nude dancing, was the discovery, one might say, of modern relations between desire, the body, and the gaze." 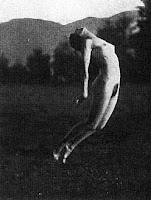 Some felt "that to overcome a pervasive fear of the female body one had to gaze at it with the same seriousness that one applied to the contemplation of artworks. [Paul Leppin] argued that eroticism manifests itself most powerfully in conjunction with the expression of intense religious feelings, for ecstasy is always a response to an immanence of the divine. Dance offered the strongest potential for signifying and experiencing ecstasy, but Judeo-Christian dogma had smothered dance in its determination to separate eroticism from great religious feeling. As a result, European dance culture could present nothing more than the feeble, "sweet and decayed" eroticism of the waltz." 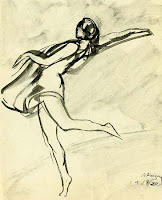 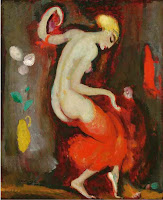 Gertrud Leistikow (1885–1948) [was considered] the most tragic and "Dionysian" of all German modern dancers, the figure closest to the primeval concept of dance as an expression of an ecstatic body. [Her] nudity served to expose movements concealed by costume and mask; more important, it revealed the "thousand-fold play of muscles" in the body. Unlike the many prewar female dancers who linked the performance of graceful movements to the signification of an elevating spirituality, Leistikow favored a hard, convulsive, ecstatic, even violent type of movement. The "thousand-fold play of muscles" disclosed by her nudity made her body a radical sign of power and freedom, contradicting traditional inclinations to inscribe female bodily strength in theosophic, exotic, and spiritual terms. Moreover, Leistikow was in her mid-thirties when she had artists document her nudity; it seems quite possible that, because she did not depend on photography to transmit her image, she succeeded in making nudity a sign of modernity without imprisoning that sign within the image of virginal youthfulness pervading female nude dancing in the 1920s."

Gertrud Leistikow had a slender, supple body, but her face lacked charm, elegance, or mystery. She therefore constantly sought to hide her face, partly through suave manipulation of shawls, veils, or masks but also through movements that called attention to the beauty of her body. Her earlier dances tended to project a tragic, melancholy aura, but after she moved to Amsterdam her distinction seemed to lie in her peculiar cultivation of the grotesque. What made Leistikow's dances grotesque was her determination to invest the simplest movements with startling dramatic power, an unsuspected intensity of conflict. 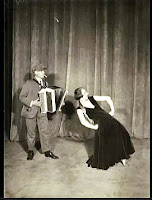 Leistikow's concept of the grotesque was cosmopolitan, so perhaps her grotesque dances constituted a curious evolution of a controlling tragic aesthetic rather than a break with it. Junk suggested that the grotesque dance displayed "more strength than grace" or, "more recently," substi- tuted "the bizarre for the graceful," as manifested through "unusual positions, deformed body structures, and adventurous leaps and gestures" (98). In other words, grotesque dancing did not necessarily imply a comic mood but perhaps made a calculated challenge to aesthetic conventions of "gracefulness" and bodily composure. Brandenburg thought such a challenge led Leistikow into the realms of the demonic and heroic rather than toward any spirit of parody, frivolity, or malicious travesty. 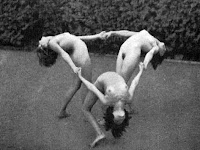 This determination was perhaps most mysteriously evident in Gnossienne (1924), which used as accompaniment Erik Satie's equally simple and haunting piano melody "Gnossienne No. 1" (1889). Here Leistikow stood in a tight-fitting, shimmering gown and faced the audience in a veiled light. She concentrated the dance almost entirely in the hands and arms, which undulated slowly, like waves, horizontally, then vertically, while her face constantly stared straight ahead with Sphinxlike inscrutability (one had to see the dance more than once to make this observation, so strongly did the arms and hands attract focus). After performing a pattern of arm undulations, the dancer took a step forward and turned into profile to repeat the pattern but raised her right leg slightly and held it suspended for the duration of the repetition. Then she turned and faced the audience again and repeated the pattern. The dancer repeated the initial pattern five times, thrice forward and twice in profile. With each repetition, the dancer merely moved forward a step or, while in profile, suggested a step in another direction without actually taking it. The dance conveyed a sense of a body very slowly and hesitantly moving closer to the audience without, in its trancelike state, even seeming aware of the spectators." 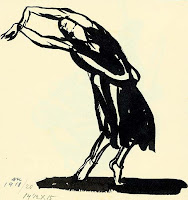 [For example, in one dance] A violet spotlight becomes coldly reflected in the pearl ornamentation of the hair. It makes the head of the dancer, with Medusa-like, wide open eyes, perch over the purple shawl which entwines and strangles her throat. The crass red cloth separates head from body, so that the head seems to float in the air, but through constant transformation the little cloth serves the movement of the dance: now it dips and flows like blood, then it throbs and flutters like lightning flashes, then it spreads like an imperial mantel around the shoulders, then it tightened again like a noose around the neck. And the language of the body discloses just as much fear of death as desire for death."

all excerpts from the online book, Empire of Ecstasy, by Karl Toepfer
drawings from here

Those Germans, they had it right. :)

Possibly going off-subject, but I'd say that in all art, whether dancing or visual, the nude has always been a mainstay, while at the same time, looked at askance. As I read years ago in an American Artist magazine- I couldn't possibly eat dinner with THAT hanging on the wall opposite me.

Back in my day, we called "grinding" something else (& we didn't do it on the dance floor), & there was definitely an art to it...but now I've definitely strayed way! off subject.

there's artwork and poems at the site--think i accomplished your goals?

Yes. I remember "Yellow Silk". I remember that sometimes I'd be truly wowed, then, not so much. Nothing against the magazine- I've learned enough about myself to realize my disappointments many times hinge on wants & expectations- I want more of this- I think it should be like that. Sometimes I can alarm myself wondering what I missed simply because I wasn't looking fairly at what was in front of me- I was too busy hoping for something else.