japonisme: catch a scent of salt

catch a scent of salt 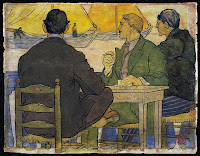 my dead mother--
every time I see the ocean
every time...

Issa's mother died when he was a small child. In his diary, this haiku is followed immediately by another ocean poem: 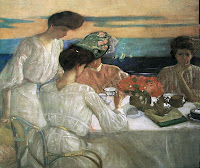 murasaki no kumo ni itsu noru nishi no umi
on purple clouds
when will I set sail?
western sea

In mythic terms, the western sea separates this world from the Pure Land. The ocean, then, is a barrier between this world and the next, keeping Issa separate from his beloved mother.

We don't see the ocean, not ever, but in July and August
when the worst heat seems to rise from the hard clay
of this valley, you could be walking through a fig orchard
when suddenly the wind cools and for a moment
you get a whiff of salt, and in that moment you can almost
believe something is waiting beyond the Pacheco Pass,
something massive, irrational, and so powerful even
the mountains that rise east of here have no word for it.

You probably think I'm nuts
saying the mountains
have no word for ocean,
but if you live here
you begin to believe
they know everything.
They maintain that huge silence we think of as divine,
a silence that grows in autumn when snow falls
slowly between the pines and the wind dies
to less than a whisper and you can barely catch
your breath because you're thrilled and terrified.

You have to remember this isn't your land.
It belongs to no one,
like the sea you once lived beside
and thought was yours.
Remember the small boats
that bobbed out as the waves rode in,
and the men
who carved a living from it
only to find themselves
carved down to nothing.
Now you say this is home,
so go ahead, worship the mountains as they dissolve in dust,
wait on the wind, catch a scent of salt, call it our life.

DYING MAN (inner voice): Don't look at me so stupidly! Haven't you seen anyone croak before? Shit, is it this easy? I'm lying in a puddle, stinking like an oil tanker. I can't really end up here like a cow shit! Everything so clear! How they stand there gawking at me. The oil puddle...
DYING MAN (Inner voice): Karin, I should have told you yes-terday... This thing got out of control. ...I'm so sorry. Karin! Now I'm lying here. I can't simply... I have to... Karin, there are so many things I still have to do! Karin, Baby, things look bad for me.

DAMIEL
(speaking for the DYING MAN):
As I emerged from the valley out of the fog into the sunshine...
The fire
at the edge of the prairie...
The potatoes in the ashes...
The boat-house
far off at the lake...

DAMIEL and the DYING MAN:
The Southern Cross,
The Far East,
The Great North,
The Wild West,
The Great Bear Lake! 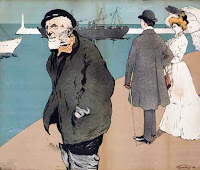 DYING MAN :
The morning light.
The child's eyes.
Swimming in the waterfall...

(click to see the scene)
VOICE OF THE DYING MAN (off screen):
The flecks of the first raindrops.
The sun.
Bread and wine.
Skipping.
Easter.
The veins of leaves.
The fluttering grass.
The colors of the stones.
The pebbles on the river bed.
The table cloth in the open air.
The dream of the house...

...in the house.
The neighbor asleep in the next room.
Sunday's peacefulness.

The horizon.
The light from the room...

In the garden.
The night flight.

Biking with no hands.

My mother.
My wife.
My child.


from Wings of Desire

posted by lotusgreen at 8:20 PM

These pictures in combination with the selection of pictures in writings evocing strong feelings, memories and smells of days gone by. What a great post. So much said in so little words in so small a space.
You're pictures archive and the extend of your reading obviously equaling your mental and memory searching capabilities.
Thank you for a most enjoyable experience lily.

thanks, sweetie. i once had proposed a certain book to a certain publisher. it was to be what i called "landscape poetry"-- it was poetry about nature, and the tone was one of reverance.

the editor challanged me to find at least 100 poems so that i could show her what i was aiming at. in putting together that book, i got to know a whole other group of poets in addition to all the ones i knew from publishing a literary magazine for 15 years.

it's so cool to be able to use some of that to weave together this place here.

i was just thinking the other day-- what i do on the blog is similar to what i did with the magazine, stitching together word and image to illuminate both.

i spent quite a long time putting this post together, because the combined images seemed to really be saying so mething, but it was difficult to tune in to what that feeling was, and then to find the literature to accompany. it ends up being a very intuitive process, so it's good to hear that it reaches someone else too.

Please continue the landscape poetry, this one felt like Rilke's "Herbstag".
thank you

ah--now i must hurry to find that. i feel grateful to have found this work.

Loving the ocean, I picked up mostly on the ocean imagery (I drove past a motorcycle accident once- not an image I'll soon forget)...and mountains not knowing the ocean...what occurred to me, image-wise, were that mountains were waves, moving infinitely slowly, valleys & plains just the space between waves...

evan! that is the most startling, original, & beautiful image -- thank you