it is always interesting to me to watch japonisme as waves, washing over the west over the decades, as this is highlighted in one year, and that in another. from its first faces in the haystacks and bridges of the impressionists, still painted with the hand of the west, through the blossom of the poster with its asymmetry, blocks of color, outlines, and more, and on through to the beginning of the art deco years. 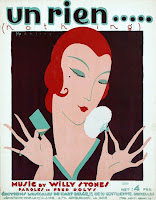 it is in those years, the 20s and 30s, the jazz age with its flappers and charm, that we see some of the most clearly influenced images of all: the chic simplicity of the faces of women. in magazines (and on their covers), and on the covers too of sheet music, we see as nowhere else an almost perfect uh, mirroring of the faces of the bijin in the japanese prints. 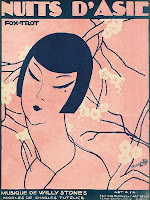 throughout the west posters, magazines, illustrated sheet music proliferated for many of the same reasons, which continuously fed back into each other: the development of modern printing, modern communication and modern transportation technologies passed new styles and info around the world as quickly as they used to pass around town after a sunday morning in church.

this is the moment when the ideal woman's body became elongated and ultra-thin, just as utamaro had fantasized in his prints. everything now must be streamlined, swift, be it autos, trains, buildings, costumes, or, of course, women. the requirement of 'charm,' was forwarded by 'movie stars,' (in her book 'charm,' actress margery wilson insisted, among much else, that 'girls' must learn to walk on 'one line,' not 'two lines.' try it.)

as women's freedom grew, so grew the strictures by which she must present herself physically. the mirror of this in the sixties are the books 'fascinating womanhood,' by helen andelin and 'the feminine mystique,' by betty friedan as analyzed brilliantly by holly welker in bitch magazine. (note: at the time, i found myself in both consciousness-raising groups and fascinating womanhood classes. come to think of it, the second actually led me to the first.) 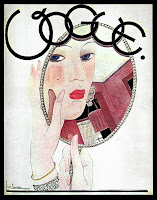 from bitch: '[where] In The Feminine Mystique, Betty Friedan complains that "the only passion, the only pursuit, the only goal a woman is permitted is the pursuit of a man," Andelin insists that a “fascinating woman” finds happiness precisely by assuming a secondary status and lacking an inner life. Being infantile, manic, pixie-ish, and dreamy [is] posited as an important ingredient in attracting a mate, which is the most important element of female happiness.'

in yet another iteration of several of my favorite themes i look at how malleable we as women are expected to be, even more so as we assume increased power. in any number of ways what is likely a majority of women still include a husband and children in their 'must haves.' and as long as that remains true, the girdles and facepaint will remain in the weekend bag. and it will always remain true.

sitting getting my taxes done last month in a small office surrounded by three other menopausal women, i was surprised that i was the only one to whom it had occurred that if 'mating' ceased to be a goal (and yes, that included getting laid), the need for so many other things fall away as well. we get to please ourselves, pretty much for the first time. it can be hard, but, ladies & gentlemen, it sure is sweet.

posted by lotusgreen at 5:44 PM

i feel more driven than ever to complete posts while i still can. you could never imagine how many i've planned and never used.

elongated & thin...brings me back to school daze & illustration class, back in the days when most fashion adverts were drawn...the classical equation for human height/proportion was seven heads...for fashion it nine...

...and amazing & wonderful how Eastern aesthetic found its way into the "modern" art of the time...Modigliani's figures are very oriental in their curves, proportions & even the eyes are almond shaped...

as always- wonderful images & I learned &/or remembered something today. Thank you :)

oh -- modigliani! of course! with him, do you think it was style or astigmatism? that's amazing, the 7 to 9 heads!

Magritte before Magritte... i wonder if there was any japonisme left in his later top phase. I'll look. d

yes -- aren't they amazing? you would never guess they are by the same person. please let me know what you learn.