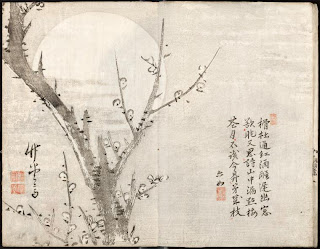 while photo- graphers in the west struggled to define them- selves, to them- selves and to the world, as artists, many japanese printmakers were going through a similar process. ironically, it was due to the 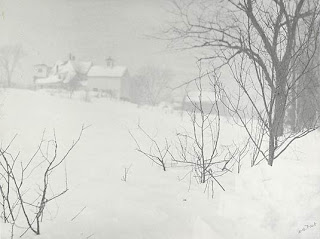 popularization of the camera that interest began to falter in woodblock prints in japan, as one impor- tant function they had ful- filled was to document. 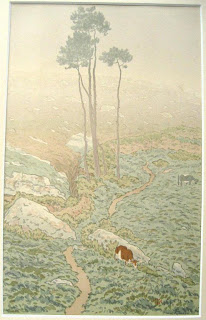 artists in france were going through a related process, breaking free of the documentarian, glorified, idealized portrait of life that was still what was considered appropriate as real art in france. impressionists and printmakers were hotheads; this would all 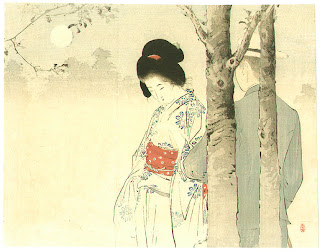 blow over. documentation was no longer a goal of


many of the fine arts, and thus artists were freed to explore the sensations, impressions, of a particular place, rather than its precise dimensions.

posted by lotusgreen at 5:17 PM

Plum blossom in flaming open , i still could not sober from drunk. i rely on the scenic vistas window, feel a bit sleepy but feel like to write a poetry.stand on this watchtower of remote mountain , i did not expect to see such a bright full moon, Ah,it should not arose at this time , quietly through the green twigs .

i try to write down what i see in the first painting, the poetry and the Kanji which written by artist are very beautiful.Thanks for sharing.

that was very beautiful, pan. really. did you just write that yourself? is it a translation? do you read japanese, or is it chinese?

any time you want to translate anything.... or contribute poetry to the blog, feel welcome to. that goes to all and any too.

i can't read Japanese , but this poetry is use of Kanji(not really Chinese character), So i just figure out the meaning of some words, few of the words may be used in ancient written, now unable to judge or read, i try to comparison with this image and guess, therefore it's not a translation ,i just write down the words in English sense, the other with my point of view to write down what i think it will be. i hope it maybe a little help for those friends who unable to read Chinese characters or Kanji ,have a basic understanding of this Kanji poetry.