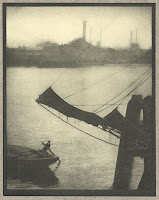 William B. Post (1857-1921) of Fryeburg, Maine, was an influential member of the Photo- Secession, the group that first championed art photography in the United States at the turn of the 20th century. A colleague of Alfred Stieglitz, Post was active from the mid-1880s through the 1910s, producing platinum prints. 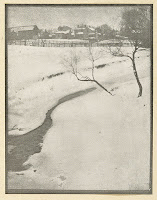 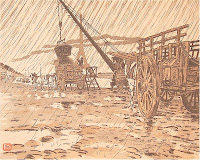 Post frequently captured the seasonal changes to the Maine landscape in his sensitively printed photographs such as Intervale, Winter of 1899. The most widely exhibited photograph during his lifetime, this image also appeared as a photogravure in Stieglitz's famous magazine Camera Work. The high horizon line, the expanse of snow in the foreground, and the limited tonal ranges of the trees suggest his creative ability to invent new compositions and poetic harmonies influenced by Japanese art. His use of a narrow, vertical format and choice of floral subjects in other pictures also relates to Asian scroll paintings.

Like many painters, photographers, and designers of his day, Post absorbed the craze for Japonisme after a trip to Japan in 1891. He began showing his photographic work in New York the following year, and in 1893 he showed the young Stieglitz how to use a hand-held camera. 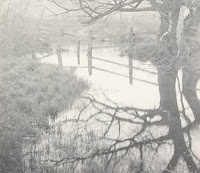 [yes, this article, reviewing a show that has been making the rounds for a year or so, is about post, but, as clearly seen in the last paragraph, it could be about ivan bilibin, in his little vertical print. it could be about coburn or white, whose photographic histories resemble that of post in many ways. and of course riviere's 36 views of the eiffel tower fits right in.]

posted by lotusgreen at 6:20 PM